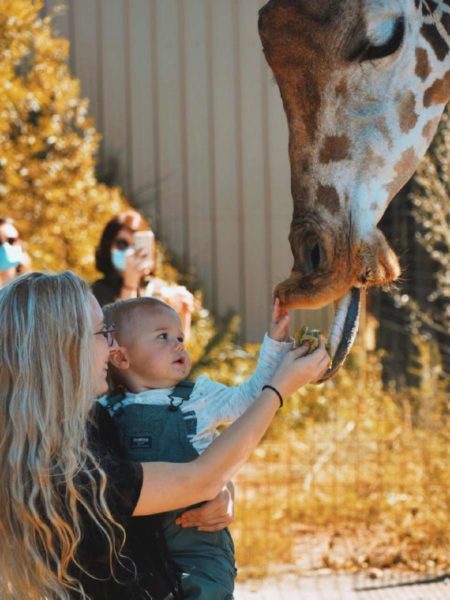 Staff at Roer’s Zoofari in Reston say they’re devastated after a barn fire killed the family-run zoo’s only two giraffes on Monday.

Although the blaze was brought under control, Waffles, a seven-year-old giraffe, and his companion, a giraffe that zoo owner Vanessa Roer acquired two weeks ago, were killed in the fire.

Staff at the zoo recently created a memorial outside the entrance of the zoo. People have been leaving flowers and balloons in memory of Waffles, a zoo-goer-favorite.

According to Roer, 20 other animals were rescued after the blaze destroyed nearly one-third of the barn.

‘Waffles was a favorite with our visitors and our team,’ Roer said. ‘We are heartbroken.’

A spokesperson for the Fairfax County Fire and Rescue Department told Reston Now that an investigation on the cause of the fire and the extent of damages is underway.

Preliminarily, staff believe that the fire may have been caused by a heater used to keep animals warm in the barn overnight.

The zoo is closed until Friday.

Three macaws were taken to Leesburg Wild Animal Park Monday night after the zoo’s veterinarian ruled out any signs of smoke inhalation. All other animals were relocated inside the zoo.

The current owners took over the zoo, which was formerly known as Reston Zoo, in 2016. The former zoo’s director pleaded guilty to animal cruelty charges.