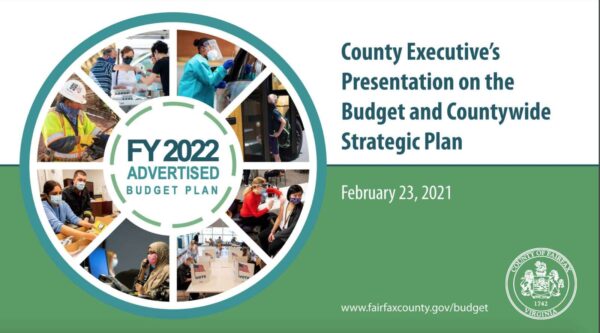 The real estate tax, a proposed freeze on county employees’ wages, and affordable housing were on top of residents’ minds at the Hunter Mill District virtual budget town hall on Monday (March 29).

Hosted by District Supervisor Walter Alcorn, the town hall gave residents the chance to provide feedback and ask questions about the county’s proposed budget for fiscal year 2022, which begins on July 1.

Fairfax County Department of Management and Budget Director Christina Jackson kicked off the meeting with a review of the proposed budget, which termed as “conservative” due to the ongoing pandemic and lost revenue associated.

Highlights include decreasing the real estate tax rate by one cent to $1.14 per $100 assessed value, schools receiving a half percent increase in funding compared to 2021, no pay increases for county employees, and “modest investments” in Board priorities like public safety staffing, environmental initiatives, and opioid use prevention efforts.

The Fairfax County Board of Supervisors voted on March 9 to advertise a real estate tax rate of $1.15. The final adopted rate could be lower but not higher than that limit.

The proposed decrease in the real estate tax rate is intended to give homeowners a bit of financial relief at a time when the unemployment rate remains high. Even with the reduction, however, the average real estate tax bill will still go up by more than $200 due to significant increases in assessed value for many county residential properties.

Lowering the real estate tax also takes about $27 million off the table for the county to use to fund other priorities, such as increased compensation for county employees and affordable housing initiatives, Alcorn noted.

Under the proposed budget, this would be the second straight year that county employee wages will not be increased.

One resident participating in the town hall said she was “incredibly disappointed” in the potential salary freeze, particularly because some neighboring jurisdictions, such as Loudoun and Prince William counties, are raising wages for employees.

“We are failing our employees who can’t afford to be [county] residents,” the resident said. “It’s really disappointing to see that the county doesn’t want to retain us because they don’t want to pay us.”

Alcorn responded that he was also very concerned about the implications of the pay freeze. Jackson noted that the county is considering potential bonuses and are annually reviewing job classifications for potential increases in 2023.

“We are trying to find ways to reward our employees with compensation increases,” Jackson said. “I anticipate that 2023 is going to be different and we might have to do a little bit of catching up if those jurisdictions do provide sizable pay increases.”

Alcorn argued that decreasing the real estate tax rate will make it “very hard” to make progress on the county level to expand the availability of affordable housing, something that has long been a challenge for Reston and a priority for the supervisor.

One south Reston homeowner commented that the annual increases in value for her townhouse have become a concern not only because it raises her tax bill, but also because it means so-called “starter homes” are no longer affordable for those looking to live in Fairfax County.

“Frequently, I go out and there’s a new baby in the neighborhood. Those are the people buying these houses,” she said. “…Because of these increases, these [houses] are increasingly becoming out of reach for many people.”

Hanging over the budget discussion is the possibility that Fairfax County will receive as much as $222 million from the most recent federal stimulus package, though the county does not know exactly when that money will come in.

The budget does not factor that money in, because it’s a one-time payment, as opposed to recurring dollars, Jackson explained.

In the last stimulus package, Fairfax County received about $200 million that was used for a myriad of needs, including virtual education, contact tracing program, business relief grants, and pandemic-related administrative leave.

Public hearings on the proposed budget will be held on April 13-15. It will go through mark-ups on April 27 and is scheduled to be adopted on May 4.