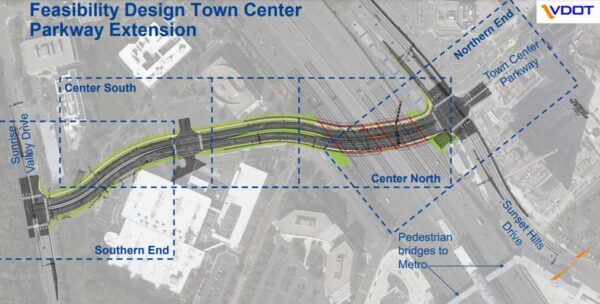 The Virginia Department of Transportation unveiled its initial concept designs for a future Town Center Parkway extension under the Dulles Toll Road during a virtual public information meeting on April 7.

Roughly a half-mile in length, the proposed underpass will connect the existing parkway at Sunset Hills Drive to the north with Sunrise Valley Drive to the south by dropping underneath the Dulles Toll Road, the Dulles International Airport Access Highway, and the new Metro Silver Line tracks.

According to Volkert Mid-Atlantic Director of Municipal and Highway Engineering Jeff Cutright, the consultant hired to conduct VDOT’s feasibility study, the extension was initially envisioned as a tunnel, but the study team realized after reviewing the project that an underpass would be “preferable.”

“A tunnel requires an expensive and complex ventilation and fire control system,” Cutright said. “Constructing this as an underpass opens the area, allowing in natural light, and is more economic and provides a more desirable solution.”

According to VDOT’s presentation, the underpass will consist of two travel lanes in each direction.

When the roadway passes under the Dulles Toll Road, the northbound and southbound lanes will be divided by a pier wall that has already been constructed by Metro to support the Silver Line tracks. A left turn lane would be added on the northbound side as the roadway approaches the intersection at Sunset Hills Road.

The shared-use path and sidewalk will continue for the length of the roadway, but they will be narrower under the Dulles Toll Road because of space constraints imposed by the Metro pier walls. Cutright says the height of the toll road bridge will allow a minimum clearance of at least 16 feet and six inches. 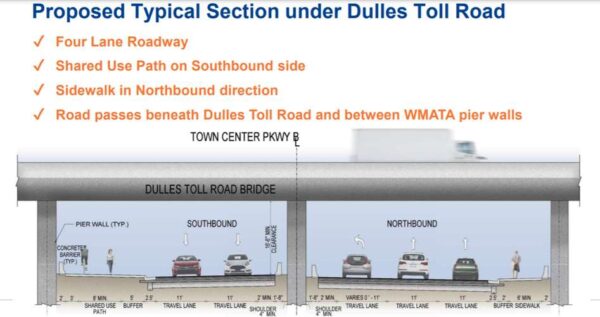 Other potential concerns include anticipated reductions in parking for the CoreSite data center and Reston Metro Center One office building on Sunrise Valley Drive. The project would also affect an existing Metro stormwater management facility at the Town Center Parkway and Sunset Hills intersection.

According to Cutright, the underpass will carry approximately 30,000 vehicles per day by 2045. He says it will result in a “substantial” reduction of traffic on Sunset Hills Road, and it is also expected to benefit Reston Parkway, though VDOT’s study focuses primarily on Sunset Hills.

“There will definitely be a benefit to reduce congestion,” Cutright said.

With a public comment period open until May 7, the feasibility study team will publish a final report this summer, but VDOT still needs to identify funding sources for the $168 million project before determining a design and construction schedule. Officials previously suggested it will not be complete until 2032.

The clear consensus from community members who shared comments at last week’s meeting appeared to be that the timeline should be accelerated. Some attendees urged Fairfax County officials to prioritize the Town Center Parkway extension over the Soapstone Connector and Davis Drive extension, which will also cross the Dulles Toll Road in Reston.

“This is where we have the most traffic,” one woman said. “Wegmans is going to draw an enormous amount of traffic, as well as the giant Gateway project and Reston Town Center. I think that’s the reason the community is so excited about this. This one is the one, I think, that the community really wants.”

Hunter Mill District Supervisor Walter Alcorn says that all three planned toll road crossings will be critical for relieving congestion throughout the corridor, including at the existing crossings at Wiehle Avenue, Reston Parkway, Fairfax County Parkway, and Hunter Mill Road.

However, the Soapstone Connector is further along in its development than the Town Center Parkway project, which still needs to go through the design process and is expected to need at least three years for construction.