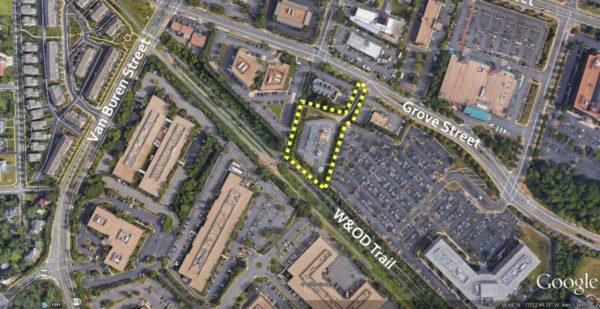 A telecommunications tower initially set to be erected on Grove Street in Herndon last year may take an additional several years to come to fruition.

On Tuesday (April 27), Herndon Town Council is set to determine whether to give T-Mobile and Maryland-based contractor Network Building + Consulting another extension on obtaining a final building inspection to build a 125-foot telecommunications monopole at 525 Grove Street.

This time, the companies are seeking a five-year extension, a significant delay compared to the six-month extension granted in September 2020. The town’s planning commission recommends that the request be approved.

The project was originally approved in April 2019 and expected to be completed in 18 months, setting up completion for September 2020. But the companies then got an additional six months for their special exception permit, which will expire this month.

In a February letter to the Herndon Planning Commission, the companies attribute that initial delay to “numerous circumstances beyond our control,” including the COVID-19 pandemic and T-Mobile and Sprint’s 2019 merger, which they say held up funding for the project.

“For that reason, our work was put on hold from approximately September of 2019-April of 2020, while we were in the process of obtaining site plan approval,” the letter said. “During this time, the coronavirus pandemic began, causing additional delays in obtaining various documents required for site plan approval.”

The same reasons are “predominantly the genesis ” for another extension and the reason for this delay, according to Herndon Deputy Director of Community Development Bryce Perry.

T-Mobile and Network Building + Consulting asked for additional time, but didn’t specify a length. So, the Town of Herndon recommended five years — adding three years to the process — to ensure another extension was not needed.

“The applicant has indicated to the town that they fully expect to complete the project well before the additional 3 year deadline,” Perry writes.

The pole is set to be built on the same site as a Virginia Dominion Energy substation, and no changes have been proposed to its original architecture plans. It’s expected to be between 120 and 125 feet tall enclosed by a 15-foot by 100-foot ground equipment facility.

The structure would butt up against the Washington & Old Dominion Trail, but it would be “minimally visible” from Grove Street, according to architecture plans from October. It would also not interfere with residential properties.

The design previously resembled a monopole being built near Herndon High School, but community opposition reduced the size and footprint of that one.

T-Mobile said in its 2019 project application that 525 Grove Street in Herndon is a good site for a telecommunications pole because there’s a need for cell service congestion in the area.