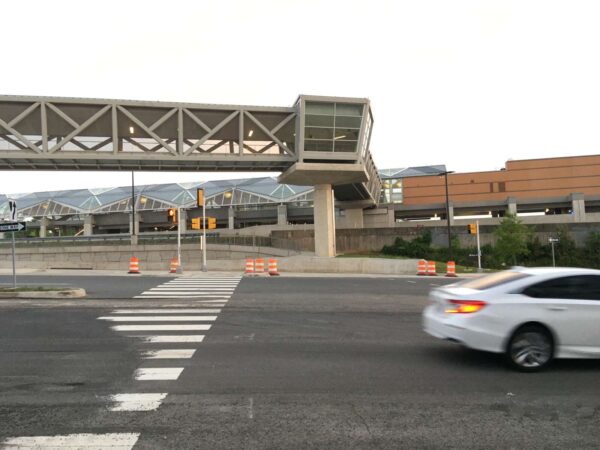 Getting to and from Metro stations can be a harrowing experience for pedestrians and cyclists, and the Fairfax County Planning Commission and others want something to be done about it.

The planning commissioners have called on the Fairfax County Board of Supervisors to require Metro, the state and county transportation departments, and more to “work immediately” to make safety and accessibility improvements for pedestrians and bicyclists to transit stations.

“This is a call for action by the public to improve pedestrian/bicycle access to metro stations as envisioned in the comprehensive plan,” Hunter Mill District Planning Commissioner John Carter said when introducing a motion during the commission’s meeting on May 19.

The measure calls for numerous changes, such as:

The motion passed, with 10 members voting for it and at-large member Timothy Sargeant, abstaining. Sargeant did not respond to a message seeking comment on why he voted that way.

“Failure to act will cause pedestrian access to continue to be ‘significantly challenged’ and ridership on the metro station to be reduced,” Carter said.

He introduced the motion during the commission’s discussion on whether to approve changes to the office-residential complex Reston Gateway being constructed, but he noted that the issues seen at Reston’s Metro stations could apply to other locations as well. 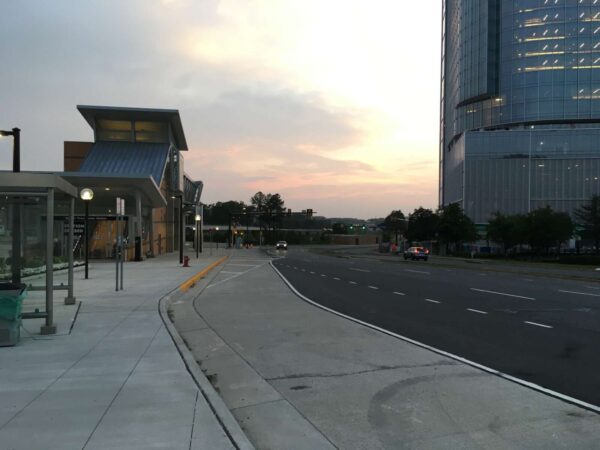 “The rail project used cookie-cutter designs,” he said, adding that a walkway over the road has been proposed but could be years away from coming to fruition.

When touring the area a couple weeks ago, Alcorn asked the Fairfax County Department of Transportation to identify short-term improvements to occur before the station opens, which isn’t expected to happen until early 2022.

“I want to make sure riders can readily get to the stations on day one and every day thereafter,” he said.

Pedestrian and bicyclist advocacy groups expressed support for the commission’s call for change.

Fairfax Alliance for Better Bicycling President Bruce Wright says some progress has been made to improve safety, but numerous deficiencies remain. The Greensboro station in Tysons, for example, not only lacks access from Gosnell Road and Westpark Drive, the roads are outright dangerous, he says.

“In general the county needs to be much more proactive in ensuring safe, convenient bicycle and pedestrian access to transit areas and activity centers,” Wright said. “We spend billions on widening arterials and not nearly enough to improve ped/bike access.”

He hopes Congress will pass a bill introduced in March that calls for $500 million annually over five years for competitive grants for bicycle and pedestrian projects.

Sonya Breehey, Northern Virginia advocacy manager for the Coalition for Smarter Growth, says the issues identified by the planning commission need to be addressed if streets are going to be safer for people navigating on foot, by bicycle, or other means that don’t involve getting in a car.

“There has been increased focus and leadership in the county on pedestrian safety, which is great,” she said. “However, VDOT continues to be a major stumbling block to these efforts since they own the roads. They continue to be reluctant to implement comprehensive safety improvements as they rely on outdated policies that continue to prioritize moving cars at higher speeds at the expense of vulnerable road users.”

The Virginia Department of Transportation says that it regularly works with Fairfax County on projects to improve safety, including on its annual Northern Virginia paving and restriping program, which addresses on-road bicycle lanes, crosswalks, and other modifications.

“VDOT works to administer and implement many projects with our local partners that go through the county’s prioritization and funding process,” VDOT spokesperson Kathleen Leonard said. “Safety is always our top priority and balancing the needs of all modes is a key consideration at each stage of the project design process.”

Fairfax County has been moving forward with its ActiveFairfax Transportation Plan, which began in July 2020 and could have its first phase approved in September. It aims to create a roadmap for pedestrians, recreationalists, and cyclists for everything from sidewalks to trails.

“The community gets so exasperated and so do we as board members because it seems to take so doggone long to get a simple sidewalk built,” Mason District Supervisor Penny Gross said during a transportation committee meeting on May 25, pointing to one sidewalk request that has been planned since 1986.

In discussing the ActiveFairfax plan, she urged county staff to examine ways to speed up the timeline for projects in addition to reducing costs.

“We really need to find a way to reduce the timeframes,” Gross, who serves as the board’s vice chair, said. “When people ask for sidewalks or some sort of amenities because their kids are little and they’re in strollers, quite often those kids are in college before we get anything on the ground.”

The Board of Supervisors plans to address the planning commission’s motion at its June 22 meeting.

The board’s chair, Jeff McKay, says the motion strongly aligns with the county’s goals for the active transportation plan, which recently concluded a round of public engagement.

“It is also an important part of building a sense of place across our county and intertwining public green spaces, walkable neighborhoods, safe paths for bicyclists and other innovations,” McKay said.

More Stories
Reston Pride returns for 2021 with online and in-person festivalsReston Home Insider: How paint can transform your home