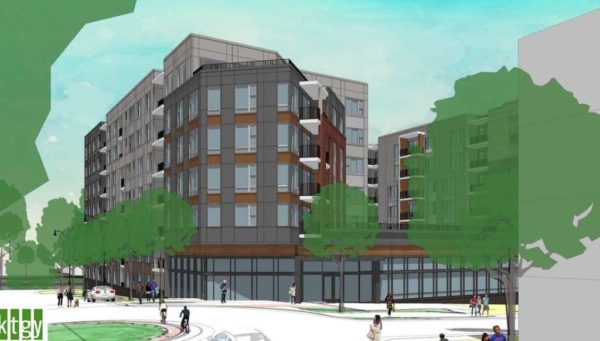 Ford told Reston Now on Wednesday (June 2) that the project is expected to be fully completed by Sept. 1.

Located at 1925 Roland Clarke Place, Sorrento recently launched a leasing website that is now accepting applications, as first reported on Monday (May 31) by Reston Skylines.

The seven-story apartment complex has been in the works since 2018, when Woodfield Investments proposed replacing an existing, vacant office building at 1941 Roland Clarke Place with residential development. The project was officially named Sorrento in July 2019.

According to the leasing website, amenities will include large and small courtyards, a sky lounge, a “resort-style” pool with a poolside gaming lounge, a private dining room, a community pantry, a two-floor fitness center, a dog spa, and a yoga studio.

Sorrento is part of a neighborhood that has been gradually undergoing redevelopment in recent years. The Sunrise Square townhomes built by Sekas Homes opened in November 2019 after two years of construction, and the Toll Brothers recently sold out its 54-unit Valley & Park townhome complex, which had been underway since 2017.

Reston Now previously reported in 2019 that Woodfield had purchased the contract for the five-story office building at 1950 Roland Clarke Place and had plans to redevelop it, but Ford says that is no longer the case.

“No, we are not planning to develop 1950 RCP,” she told Reston Now by email, adding that Woodfield had backed away from developing that property about two years ago.