The historic Lake Anne area needs more than $37 million in repairs, according to a report released by the Fairfax County Department of Public Works and Environmental Services earlier this month.

An assessment by architecture firm Samaha Associates found that the property, which is managed by the Lake Anne of Reston Condominium Association, has major issues with aging infrastructure, including damage to concrete surfaces, brick buildings, and plumbing systems. Much of that damage and distress is visible to any passer-by. 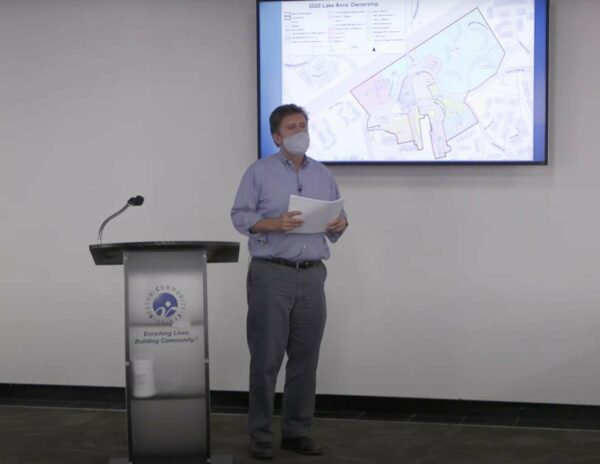 “Items not addressed in a timely fashion will cause further deterioration of the buildings and potentially create worse conditions and more costly repairs,” the report concluded.

Lake Anne was the first village center created and designed by Bob Simon in Reston. The village center was constructed between 1963 through 1967. The National Register of Historic Places has called the plaza the “the historic heart and soul” of Reston.

Hunter Mill District Supervisor Walter Alcorn held a meeting with residents and the condominium association Monday night to review the report and discuss next steps. He also met with residents in July.

The county will consider assisting stakeholders with a plan for revitalization and infrastructure improvements. But county officials stressed that community input is needed before a proposal is considered.

One option could include leveraging county assistance in exchange for the development rights of Lake Anne’s common area.

“This is a tremendous burden on the community,” Alcorn said, noting that a condominium association that manages 131 units cannot bear the financial burden of a full-blown revitalization effort alone.

Several options are on the table.

Individual residents and businesses were excluded from the assessment, which primarily examined five buildings, including the Market-deli, Chimney House, the plaza, Quayside and Heron House.

The firm broke down cost estimates for each deficiency, which was ranked by priority. A priority rating of one represents a life safety issue that should be addressed immediately while a rating of five can be addressed when feasible.

A complete breakdown of estimated costs is below. The most critical repairs are close to $20 million. 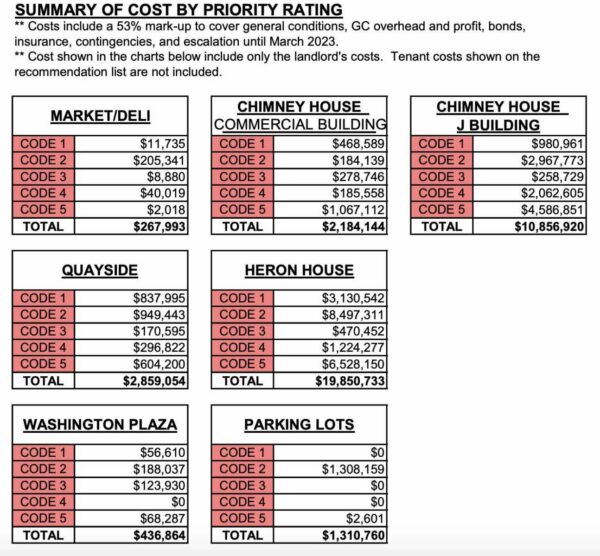 A retaining wall at the Quayside condominiums has also shifted and needs to be repaired or replaced. Additionally, the building’s water boiler needs to be replaced. Similar issues were flagged in the Heron House.

The firm visited the plaza several times in June and July this year to conduct the assessment. The assessment notes that costs are conservative, especially since water and sewer upgrades, ADA compliance and other issues were not considered in the precursory analysis.

The complete assessment is available online.