Construction on a new pedestrian bridge over Wiehle Avenue is set to begin sometime next summer.

The bridge, which would connect to the Washington & Old Dominion Trail, is intended to improve access for pedestrians and bicyclists near the Wiehle-Reston East Metro Station.

Once built, the bridge would begin on the trail and extend over Wiehle Avenue, replacing an existing at-grade crossing. The project — which is part of the Reston Metrorail Access Group‘s plan to improve pedestrian and bicyclist connectivity near the metro station – is expected to cost around $12 million.

So far, the county has secured land rights on four of seven properties affected by the project. The Fairfax County Board of Supervisors is expected to hold a public hearing on Nov. 9 at 4 p.m. on the acquisition process. 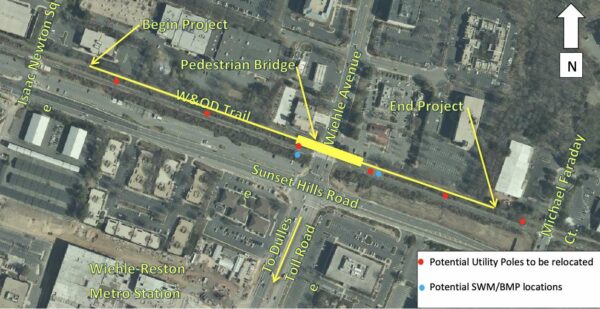 In a memo, county staff said that the board may have to use eminent domain powers to seize some property.

“Negotiations are in progress with the affected property owners; however, because resolution of these acquisitions is not imminent, it may be necessary for the board to utilize quick-take eminent domain powers to commence construction of this project on schedule,” the memo states.

Minor roadway, sidewalk, and median tweaks are planned to make the bridge possible. The bridge would accommodate the gravel path and the asphalt trail, providing full access to and from Wiehle Avenue. In the future, Wiehle Avenue from Sunset Hills Road to the Reston Fire Station entrance and the entrance to Pupatella would also be widened.

Construction is expected to begin next summer and last for roughly a year.

The Fairfax County Board of Supervisors is expected to discuss the issue at an Oct. 19 meeting.