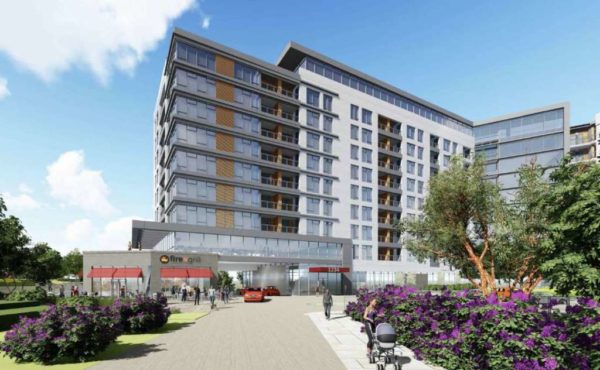 The developer of a 300-unit apartment building near the Wiehle-Reston East Metro Station and along Hidden Creek Country Club plans to scale back parking at the site.

Golf Course Overlook LLC plans to reduce the amount of parking for the apartment building planned on the site by roughly 16 percent or 51 spaces.

The Fairfax County Board of Supervisors unanimously approved the request by the developer at a meeting on Monday. The property is located on the west edge of Isaac Newton Square and next to Hidden Creek Country Club.

In a memo, staff noted that the special exception to reduce parking was justified because the property is within one-third of a mile of the Wiehle-Reston East Metro Station.

“The expectation is that residents adjacent to public transportation will require less parking,” the memo states. “While residents may not give up vehicle ownership entirely, they are more likely to own less vehicles than residents in lower-density areas not well served by transit, thereby reducing parking demand.”

According to plans submitted to the county, 215 of the units have one bedroom while the remaining units have two bedrooms.

The developer plans to reduce the number of residential parking units from 407 to 356.  The county first approved the rezoning of the property in September 2019.

Roughly 3,4000 square feet of commercial space is also planned on the site, along with the nine-story apartment building. Commercial parking will be unaffected by the proposed change.

All of Golf Course Plaza’s tenants have vacated and the developer plans to begin demolition this year, Reston Now previously reported.