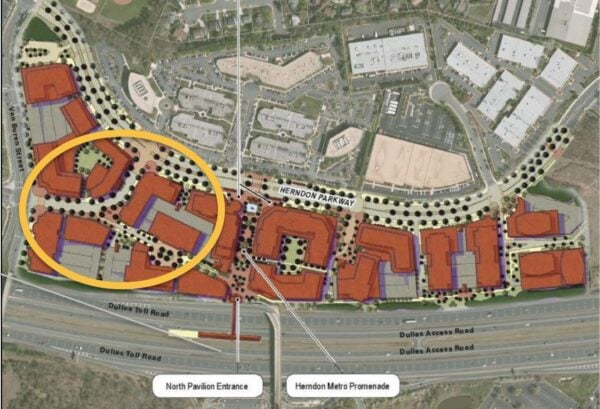 The Town of Herndon is seeking roughly $4.6 million in regional funds for planned improvements at the future intersection of Herndon Parkway and Worldgate Drive.

The $6.5 million project includes a new traffic signal at the intersection and the addition of a new dedicated turning lane, according to a staff memo.

The lanes, cycle tracks and sidewalks would connect with ongoing projects at the Herndon Parkway and Van Buren intersection and at the bus bay drop off and pick-up area, according to the application.

The new road will include a fore-lane divided road with eight-foot-wide sidewalks, a 10-foot trail and sidewalk lighting.

At a meeting tomorrow, Herndon’s Town Council will consider submission of the application to the Northern Virginia Transportation Authority for its FY26-FY27 regional funding program.

The town anticipates that the final engineering and construction of the project will be financed through private development.

The Town of Herndon’s Metrorail Herndon Station Area Plan identified the areas as a transit-oriented core where the project is deemed of critical importance, according to the town’s capital improvements plan.

The Worldgate Drive Extension is a keystone infrastructure improvement for the Herndon Transit-Oriented Core as included in the Metrorail Station Area Plan,’ the plan states.

The council approved a concept plan for the project in 2017.