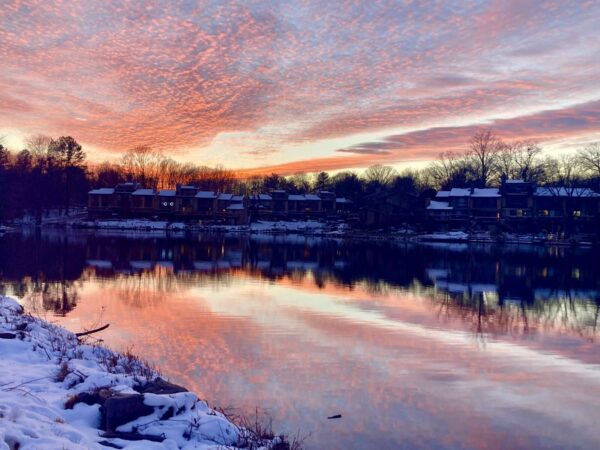 Sunset at a snowy Lake Thoreau (photo by Marjorie Copson)

Snow Closes Schools Again — Fairfax County Public Schools are closed again today (Friday) as the school system anticipated snowfall overnight into this morning. This is the last allotted traditional snow day of the year. The National Weather Service projected snow accumulation of 2 to 4 inches for the D.C. region. [NWS]

New Reston Fire Station Gears Up for Service — Some Fairfax County Fire and Rescue personnel spent Thursday moving. The department gave a sneak peek inside its new Reston fire station yesterday, as staff moved to the new location from a temporary station. [FCFRD/Twitter]

More COVID Testing Centers Coming to Virginia — Gov. Ralph Northam announced $5 million for new COVID-19 community testing centers, which will be near or on the same property as existing mass vaccination centers that have been operating since October, including one in Tysons. [Governor’s Office]

Police Shoot Man Who Aimed Bow and Arrow — A 50-year-old Chantilly man was charged with attempted aggravated murder of a police officer after he aimed a compound bow at officers Tuesday, prompting one to shoot him, the Fairfax County Police Department says. The man’s injuries were not life-threatening, and no officers were injured. [FCPD]

Parents Group Press for In-person Teaching —  “COVID is not going away,” members of the Fairfax County Parents Association said in a statement released Jan. 2. “We must learn to live in a world where COVID exists, and where children are still receiving access to a robust, in-person education.” [Inside NoVa]

Get Free Coffee for Blood Donations — In exchange for a blood donation, the American Red Cross will hand out coupons for a free pound of Dunkin’ Donuts packaged ground coffee that can be redeemed at Dunkin Donuts in the Reston area. To schedule a donation, download the Red Cross Blood Donor app or visit RedCrossBlood.org. [Patch]

One Year Since Capitol Was Stormed — The Fairfax County Board of Supervisors Chair Jeffrey McKay joined many marking the one-year anniversary of the Jan. 6 attack, releasing a statement. “It is important for all of us to remember across the political spectrum, that democracy is something we must always defend.” [Twitter]