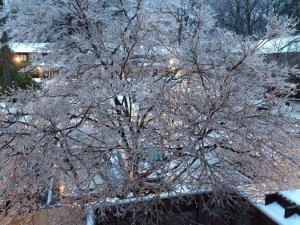 The forecast has been downgraded to a Winter Weather Advisory, in which snow — heavy at times — could accumulate from 3 to 5 inches in Reston and nearby areas.

The snow should start Tuesday at dawn and continue through early afternoon. There is the potential for 1 to 2 inches per hour coinciding with morning rush hour, the NWS advisory says.

Update, Monday noon — The icicles from Sunday continued to melt for much of Monday morning, but keep your shovels handy as the National Weather Service has issued a winter storm watch for the Reston area for Tuesday.

NWS says the entire Northern Virginia region is under the watch from Monday night into Tuesday afternoon.

Precipitation could start with sleet Monday night — but could result in accumulations of 5 inches or more of snow to fall on Tuesday,

Temperatures Tuesday are expected to be in the upper 20s and lower 30s. Morning snow could fall at rates between 1-2 inches per hour for two to four hours, the NWS says.

Also, Dominion Virginia Power reported that as of mid-day, about 4,000 customers in Reston are without power. The majority of them are in neighborhoods off Lawyers Road.

Temperatures should warm up throughout the day. The high is 42, so much of the ice should melt and additional precipitation later be rain, according to The Weather Channel.

However, the forecast calls for two to four inches of snow on Tuesday.

Dominion Virginia Power says more than 46,000 customers are without power, 23,000 of them in Fairfax County. To see more specifics, check out Dominion’s Outage Map. To report an outage call 1-866-DOM-HELP.

A tractor trailer filled with tires overturned early Monday morning on the outer loop of the Beltway near Tysons Corner, causing delays for drivers. Virginia State Police said they could not determine if the accident near Chain Bridge Road was caused by weather-related problems. The incident occurred just before 3 a.m. near Chain Bridge Road. By 7 a.m., two lanes were getting by, but backups are still significant.

Somewhere you have to be? Read these tips from The Weather Channel on driving on ice.

This story will be updated as developments warrant. Have any great weather photos? Tweet us at @RestonNow, post them on our Facebook Page or email to [email protected].