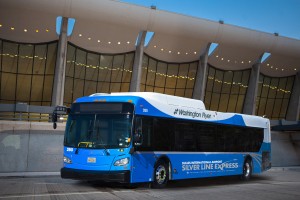 Instead of running to and from the West Falls Church Metro station, the dropoff and departure points will now be Reston-Wiehle East. That station, at the intersection of Wiehle Avenue and Sunset Hills Road, will be the terminus of the Silver Line for at least five years.

More importantly, the bus from the airport to the Metro will be shorter and much cheaper. The fare will decrease from the current $10 one-way or $18 round trip to $5 each way, Metropolitan Washington Airports Authority spokesman Rob Yingling told The Washington Post.

When Phase 2 of the $5.6 billion Silver Line is completed, the rail will extend all the way to Dulles and into Loudoun County.

There still is no firm opening date for Phase 1 of the Silver Line, which will run from Tysons Corner to Reston. MWAA Officials are currently in the testing phase of the rail line, but have said they expect to turn the project over to Metro this month. The line should open within 90 days after that.

Other changes coming to the airport transport: