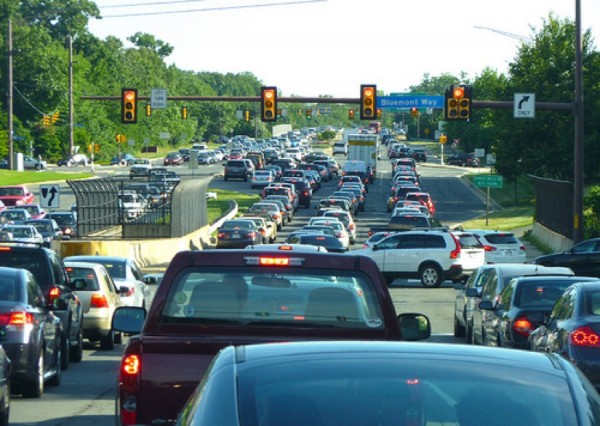 Fairfax County transportation staff has selected a location for a future four-lane extension of Soapstone Drive that will cross the Dulles Toll Road.

Transportation officials have been looking at several alternatives for the crossing for more than a year. The crossing would be one of several recommended for Reston to alleviate traffic from north to south.

The opening of Metro’s first Reston Silver Line station later this year is expected to bring additional development, cars on the road, residents and workers to Reston. The recently approved changes to the Reston Master Plan allow for the construction of 22,000 new residential units, more than 8 million square feet of new office space, 2 million square feet of new hotel space and 700,000 square feet of additional retail. Reston could see more than 30,000 new residents, as well as tens of thousands of workers, with the development.

Transportation staff showed four options in a report in February of 2013. The most prudent one, presented last week, combines two of them: a direct extension of Soapstone that crosses slightly northwest and ends at a new intersection at Sunset Hills.

The plan would impact several properties on both side of the toll road, including Solus and Musica on the north side and the National Association of Secondary School Principals on the south.

The proposal will now move on to the Fairfax County Board of Supervisors for approval.

While planners did not estimate the cost of the project, they did predict last year that $100-150 million would be needed for a future Soapstone crossing.

Identifying funding for the project will also come next. The project currently has $2.5 million for the next phase of preliminary engineering and environmental impact studies.  If it moves forward, the project will be added to the county’s unfunded $4 billion transportation project queue.

A Soapstone crossing (at a cost of $91.75 million) has already been identified on the county’s list of high-priority projects for 2015-20.