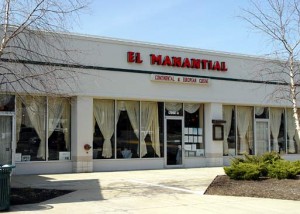 Now that El Manantial is the latest business to announce its departure from Tall Oaks Village Center, it is time to play Fill This Space.

This has been a common game in the last few years as many businesses, including anchor Compare Foods, have left the shopping center. Among them: Curves gym, Dominos Pizza, a hair salon, Total Rehab Chiropractic.

El Manantial in 2011 received Reston Association Design Review approval to build a 40-seat, three-season patio, but never started the project. Owner Humberto Fuentes says he will move his high-end restaurant to Old Town Herndon this summer when his lease expires. He said he chose not to renew his lease partially due to the number of vacancies at the center.

What do do about Tall Oaks, where some stores have sat empty for years, has been a hot topic among Restonians. Reston Citizens Association President Colin Mills wrote about his ideas in 2013.

The landlord and owner of Tall Oaks did not return calls.

The El Manantial space has empty stores on either side, and is one empty storefront from the 25,000-square-foot empty grocery store space. That means some interested retailer could put together a very large space.

What do you think should open there? Tell us in the comments.