More than 200 artists will have their works on display at the annual Northern Virginia Fine Arts Festival at Reston Town Center May 16-18. Also on display: The new Kia K900 luxury sedan as the carmaker has signed on to be a major sponsor of the festival.

“Securing a widely-recognized and respected lead sponsor is a testament to the preeminent nature of this event on the Northern Virginia calendar,” said Holly McCullough, executive director of Greater Reston Arts Center (GRACE), which organizes the event. “The Festival, which features over 200 juried artists from around the country, is already a nationally top-ranked fine art and craft festival, attracting 30,000 visitors annually. With the Kia K900 sponsorship, we can continue our efforts to make the Festival an even more dynamic destination event in the region.”

The K900 is Kia’s first entry in the luxury car market. It features a 5.0 liter V-8 engine that will go from 0-60 in 5.5 seconds, Kia says. The top-of-the-line model will cost about $60,000. Actor Laurence Fishburne is doing the voice over in TV ads, where he asks car buyers to : “Challenge the luxury you know.”

Kia’s Vice President of Marketing Tim Chaney said Kia is involved in many community outreach programs on the local and national level, and the Northern Virginia Fine Arts Festival is an excellent match for the company. 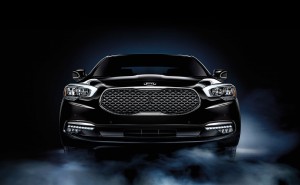 “The GRACE Festival is the perfect example of the kind of community outreach we like to promote,” he said in a press release. “GRACE and this Festival are major components of the Northern Virginia cultural landscape and we are really proud to be able to associate the Kia K900 with such a fantastic cultural institution.”

A K900 will be on display throughout the Festival weekend. In addition to the artwork on display, the festival includes a ticketed Opening Night Party on Friday, May 16 (5-8 p.m.); musical performances throughout the weekend; an Il Fornaio hospitality station in The M Group Pavilion; a Family Art Park (featuring children’s art activities, a public art project, and face painting); and a Celebrity Cruise Raffle (a one-week cruise for two).