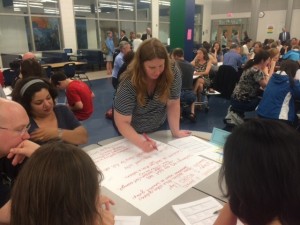 Community feedback on changing Fairfax County Public Schools start times has now been organized by FCPS and posted on its website.

The school board will get a final presentation on the four start times option at a meeting later this month.

What the experts found: The students were chronically sleep deprived with a 7:20 a.m. start time. Pushing high school start times past 8 a.m. would have an impact on everything from behavior to grades to driving records and sports injuries, the experts say.

“Delaying school start times is one of most important ways to help ensure adolescents are getting enough sleep,”  study leader Judith Owens said at a May 27 meeting at South Lakes High School. She also said students who start school after 8 a.m. are less likely to be depressed, get better grades, score as much as 200 points higher on the SATs and may have higher future earnings.

The CNMC team formulated four scenarios for high school bells. The changes would not go into effect until fall of 2015. The proposals range from start times between 8 and 9:15 a.m., with various changes for elementary and middle school students in order to accommodate the high schoolers.

See details on all four proposals on FCPS’ website.

The proposals will cost between $2.7 million and $7.6 million to implement, mostly to purchase new buses, school board members said. Meanwhile, the FY2015 schools budget was passed this spring with less money than expected from the county board of supervisors, so FCPS had to make $97 million in cuts and will offer employees delayed step raises.

The feedback posted online is from small group discussions from meetings at eight FCPS high schools, including Reston’s South Lakes High School, in May and June. The comments concentrate on the pros and cons of each proposal.

All four options have pros and cons, the community feedback shows.

Some of the pros in community feedback: More sleep for high schoolers, obviously; Options 2 and 3 help families by having siblings home to watch younger kids in the afternoon; teachers will get more sleep; Option 4 is good because high schoolers get more sleep and elementary students will not be impacted.

Some of the general parent concerns about all options: cost of implementation; middle schoolers may get less sleep too; elementary students will be going to school in the dark; and that FCPS has not given the option of “no change” to bell schedule.

Where do you stand on the proposed high school bell changes?