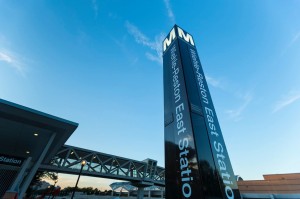 As Reston prepares to become a transit-oriented community, it is also preparing to for urban-style issues. Among them: The opportunity for crime.

Chief Ed Roessler says that combining an increased population with urban-style gathering spots does increase the chances for crime. But it doesn’t mean it has to increase actual crime rates.

“The opportunity for crime is more prevalent when you open up a Metro station,” says Roessler. “What you see are breaking into cars late at night and more people traveling corridors from platform to garage and pedestrian pathways. That is what we are concerned about and we have taken action to prevent that.”

Roessler says FCPD has been planning for crime prevention around the new transit areas for many years — about as long as Metro’s five-year course of building the Silver Line.

The FCPD, boosted by additional funding from the Fairfax County Board of Supervisors to add nine positions to the department, created the Tysons Urban Team in 2013. The police department’s five-year strategic plan calls for a similar unit in Reston, says Roessler.

Crime around Metro stations is actually quite low in Virginia, says Metro. The transportation agency says there were 7.1 serious crimes per million riders overall in 2013, with far more in D.C. and parts of Maryland. The majority — 70 percent — were thefts, says Metro Police Chief Ron Pavlik. He said that the Virginia stations are some of the safest in the system.

“Typically, crime on Metro is reflective of crime rates in the surrounding communities,” he says. “We don’t see a lot of ‘Part I’ (violent) offenses in Virginia.”

Pavlik says riders will see a high police presence the first few weeks the Silver Line is open. But riders still need to be aware to stay safe. He offers these tips: