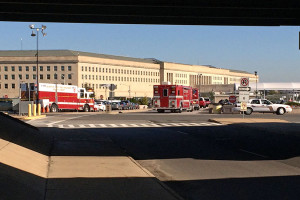 (Update, 6 p.m. Tuesday). Virginia Hospital Center has issued a statement about the incident. Read it on ARLnow.com.

The woman suspected of having Ebola and taken to Inova Fairfax Hospital on Friday was taken there from the Pentagon because the nearest facility, Virginia Hospital Center in Arlington, refused to treat her, ARLnow.com reports.

The Arlington County Fire Department told ARLnow.com that VHC refused the woman — who at the time was thought to potentially have the deadly Ebola virus — when medics brought her to the hospital. She never left the ambulance.

“We were turned away,” said ACFD spokeswoman Lt. Sarah Marchegiani. “We followed our protocol and brought the patient to the closest hospital (VHC), at which point we were rerouted to Fairfax Inova.”

The woman, who was not identified, vomited on a tour bus near the Pentagon Friday morning and set off quarantines across the region. Medical officials said late Friday the woman did not have Ebola. They also said she had not traveled to West Africa, as she first told authorities.

However, the situation brings up questions on whether hospitals in the area — and across the United States — are prepared to handle Ebola. Earlier this month, VHC said it was prepared for Ebola patients.

Said the hospital in a statement:

“Virginia Hospital Center wants to reassure our community that the Hospital has the infrastructure and procedures already in place to screen, and if necessary, isolate, test and treat all high-risk patients. We drill and prepare for just such situations; therefore, our staff is highly trained to take appropriate precautions for a suspected and/or confirmed Ebola case.

A multi-disciplinary task force has reviewed our infection control guidelines and reinforced education of the Hospital staff to ensure it can detect a patient with Ebola Virus Disease, protect all healthcare workers so they can safely care for the patient, and respond to the patient in a timely manner.”

Meanwhile, the Centers for Disease Control on Monday issued new guidelines for health care facilities after it was determined staffers at Texas Health Presbyterian in Dallas were not given proper guidance when treating Thomas Eric Duncan, a man who had recently traveled to Liberia, when he presented with Ebola symptoms. Duncan has since died, and two nurses who treated him are also being treated for the disease.

ARLnow.com reporters contributed to this article.