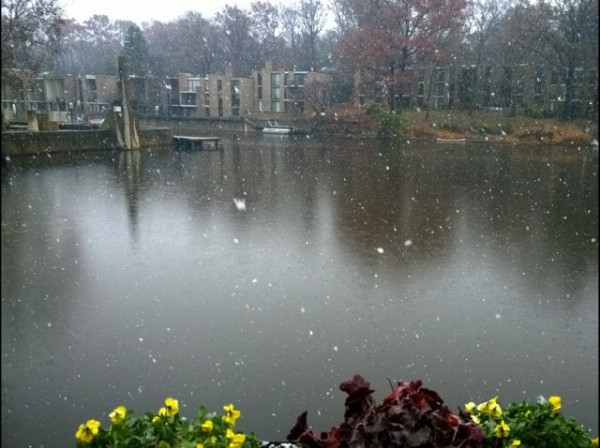 The first snow of the winter of 2014-15 began as scheduled — at about 10 a.m. on Wednesday, just as people everywhere were getting ready for the pre-Thanksgiving scramble.

The snow stuck to grassy areas, but was not accumulating on most roads around Reston. While some residential roads appear sloppy, major and secondary roads were clear as of about 12:30 p.m.

USA Today reports that hundreds of flights were canceled in anticipation of the storm on one of the busiest travel days of the year. Washington-area airports are reporting some delays. Check with your airlines or Flightaware.com to see where your travel plans stand.

The Virginia Department of Transportation said yesterday it has about 400 trucks staged in Loudoun, Fairfax, Prince William and Arlington counties in preparation for the storm, even though it started as rain and may revert back to rain later.

VDOT urges drivers to “use extra caution, particularly on bridges, overpasses, curves, hills and ramps, which become slippery first.” Crews are not pre-treating roads since the rain would wash the treatment away.

AAA Mid-Atlantic says the weather could mean frustration for highway travelers Wednesday. Some motorists already heeded AAA’s warnings and left for the holiday on Tuesday.

That was probably a good plan.

“Wednesday can turn into a chaotic and frightening scene of events on the roadways along the East Coast,” said AAA Mid-Atlantic spokesman John Townsend. “With over one million travelers in Washington, D.C., another 1.1 in Virginia, and nearly 900,000 in Maryland taking to the roads this Thanksgiving, AAA is warning motorists to heed all travel warnings and stay home until road conditions improve.”

The National Weather Service says  additional snow may fall overnight and temperatures will hover around freezing. Thanksgiving Day calls for a chance of rain and snow showers, mainly between 8 a.m. and 2 p.m. with a high around 40.

Photo: First snowflakes of the season at Lake Anne/Credit: Ken Knueven via Facebook

END_OF_DOCUMENT_TOKEN_TO_BE_REPLACED

More Stories
Op-Ed: Thanksgiving and Empathy in RestonReston Pet of the Week: Rocket