Fairfax County Police have released a description of the suspect in a Monday afternoon bank robbery at the PNC Bank inside the Giant at North Point Village Center. 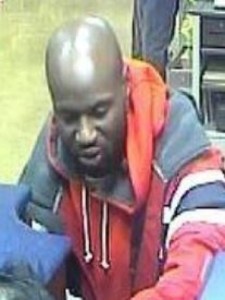 Police said the suspect is black, around 5 feet 11 inches tall, 170 pounds and unshaven. He wore a red Nike hoodie and the hood was on his head during the crime.

That is very similar to the suspect in a Dec. 15 robbery at the Sun Trust branch inside the Safeway at Hunters Woods Village Center.

In that incident, the suspect was described as a black man, in his mid-20s, wearing a red jacket with black stripes.

Both robberies occurred at 5 p.m. on a weekday at crowded Reston supermarkets. In both incidents, the suspect told the teller he had a weapon and fled with an undisclosed amount of cash.

The PNC robbery was the fourth bank robbery in Reston in the last several weeks.

In addition to the grocery store branches, robberies took place Dec. 10 at the Wells Fargo Branch at Reston Town Center and Nov. 26 at the Presidential Bank at 1675 Reston Parkway.

Detectives and agents are investigating whether or not any of these bank robberies, including last night’s in Reston, are linked.

More Stories
2014 Year in Review: Closings in RestonTime To Sell? Start Now to be Ready for Spring Market