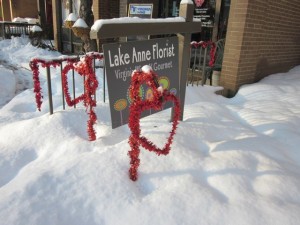 Lake Anne Florist — Virginia Wine & Gourmet will close at the end of this month as owner Linda Fuller is retiring.

Fuller, who has been operating the shop at 11426 Washington Plaza since 1996 — and at other spots in and around Reston for 40 years — has been seeking an owner for her businesses since last summer. Asking price for the business is $24,995.

Chesapeake Chocolates, the homemade chocolatier that rents a small corner of the Lake Anne Florist space, will remain open.

Meanwhile, Lake Anne Florist will hold a big retirement sale from now until Jan. 31. Among the discounts:

Lake Anne Florist is one of several locally-owned businesses at Lake Anne to close in the last year. In 2014, The CupCake Ladi, New Family Naturals, Lakeside Pharmacy and Jasmine Cafe all shut their doors. Lake Anne Coffee House remains for sale.

The area surrounding the plaza is readying to undergo a massive redevelopment, which will bring higher density to the area and is expected to revitalize the retail area in the historic part of Lake Anne Plaza.