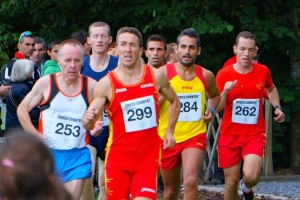 Reston is shaping up to be one of the major competition sites at this summer’s World Police and Fire Games.

Reston Association is expected to approve at its meeting on Thursday the use of its pools, lakes and trails for the games’ triathlon, half marathon and open water swim.

The biennial games are expected to attract more than 12,000 police officers and firefighters  — as well as thousands more spectators — to Fairfax County June 26 to July 5.

There will be competition in more than 60 sports — some of them typical olympic events such as track and field, others more esoteric, such as climbing flights of stairs at an office building.

Here’s what Fairfax 2015 has in store for Reston:

Half Marathon, July 5 — About 800 athletes are expected to run on the course that will begin and end at Reston Town Center and take place in part on Reston trails.

Other events in Reston include indoor rowing (on rowing machines) at the Hyatt Regency Reston and wrist wrestling at the Reston Town Center pavilion.

RA documents say all costs to use RA locations will be paid by organizing group Fairfax 2015. RA maintenance crews will insure the trails are passable and the aquatics team will assist in coordinating lifeguards for the swim events, but there will be no budget impact, RA documents say.

To see a full schedule of events and locations and other World Police and Fire Games information, visit the Fairfax 2015 website.