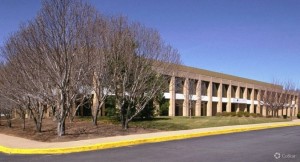 Isaac Newton Square, the aging office park at Sunset Hills Road and Wiehle Avenue, could have a future as a residential neighborhood, according to Reston Master Plan Phase 2 recommendations.

“This area represents an opportunity to create a new residential neighborhood organized around a local-serving park,” Fairfax County planners say about the office park in the Master Plan Phase 2 draft.

The complex of low-slung office buildings, which includes Reston Sport & Health, Reston Montessori and KinderCare among other offices and businesses, is in walking distance of the Wiehle-Reston East Metro Station and backs up to Hidden Creek Country Club’s golf course, as well as the W & OD Trail.

According to the Master Plan Draft, which will be voted on by the Fairfax County Board of Supervisors on June 2, Isaac Newton Square is planned for up to 2.0 FAR (Floor Area Ratio), a mark of medium density.

Here is what the draft says about Isaac Newton Square, which was built in the 1960s and 1970s:

The opportunity exists to achieve the Residential Mixed Use goal of 75 percent residential uses for the larger area if Isaac Newton Square redevelops in accordance with Plan guidance.

It is planned for up to 2.0 FAR with a residential and hotel component on the order of 90 percent of new development (approximately 3,200 units of the 4,600 units in the Residential Mixed Use area).

In light of the older, very low-density buildings, surface parking lots and undeveloped areas in this business park, a shift to a residential focus for this area can be achieved.

Residential buildings should front on tree-lined streets and be designed with inviting street level facades. This area represents an opportunity to create a new residential neighborhood organized around a local-serving park. This area should also be considered as a potential location for an athletic field to meet the need for the TSA.

Isaac Newtown Square currently contains many vacancies, according to commerical real estate listings. It is managed by Lincoln Property Company. Thus far, there are no plans in the works to transform the commercial area.

Phase 2 of the Master Plan will be a guiding document for Reston’s village centers and neighborhoods as Reston grows in the future. Phase 1, which sets guidelines for high-density areas near Reston’s transit centers, was approved by the Board of Supervisors in early 2014.