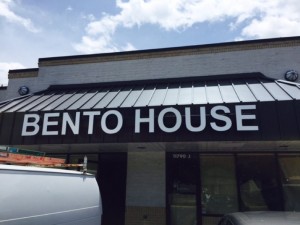 The restaurant signed a lease for the former space of Active Family Chiropractic in Reston’s Home Depot Shopping Center earlier this year.

Bento House owner Eric Zhou said at the time he hoped to be open by late spring.

Bento House will be a locally owned, counter service Japanese spot, he said.

The plan changes for Reston’s village centers, convenience centers and neighborhoods were approved by the Fairfax County Board of Supervisors earlier this month.

The 22-acre retail area at Baron Cameron Avenue and Reston Parkway was originally planned to be part of Reston Town Center, but was never developed to the same scale or design as town center or the nearby Spectrum.

However, with the Spectrum slated for a massive mixed-use overhaul, the Master Plan Phase 2 took a look at the future of the center, which has a variety of stores, many of them locally owned.

The final report said the community is willing to accept additional uses in this area, such as residential, hotel, and office. However, the community does not desire the density or intensity of development allowed in the Reston Town Center.

The Home Depot center is likely to remain the same level of density and uses, but look for opportunities to improve pedestrian and bicycle connectivity.