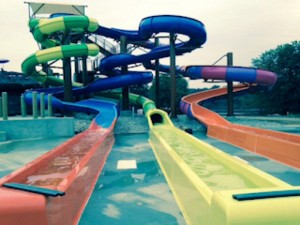 A $5.5 million expansion of Lake Fairfax Park’s Water Mine Family Swimmin’ Hole is nearly complete and will open on Saturday, Aug. 1.

The Fairfax County Park Authority will hold a ribbon cutting on Aug. 1 at noon.

The star attraction among the improvements include a new slide tower with three chutes. This will add excitement for older children as many of the park’s features a geared towards the under-12 crowd.

Other changes include include new spray pads and play structures, as well as an additional restroom with family changing rooms.

More improvements are coming, park authority officials said. IN 2016, the Water Mine will add individual cabanas, improved shaded seating areas in the grass area around the Water Mine, an additional play structure in the spray ground and space for mobile food vendors.

The Park Authority Board approved the expansion in February 2013; construction began in October 2014. It was financed by park bonds.

The Water Mine has been a major attraction at Reston’s Lake Fairfax Park since 1997. Previous features such as the Big Pete and Little Pete slides and the Rattlesnake River, where patrons lounge in inflatable tubes while the current moves them through the water, remain open.