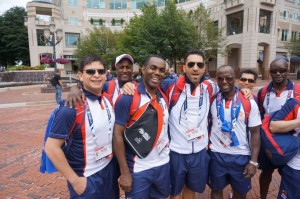 The estimate exceeds the $50 million economic benefit the organizers predicted just before the Games. The biennial event ran here from June 26 to July 5.

Barry Biggar, president of the Fairfax County Convention and Visitors Corporation, told the Fairfax County Board of Supervisors at a meeting Tuesday the figures are conservative and do not include spending by 3,500 volunteers, who received 17,000 complimentary meals but likely spent some of their own money, or overnight stays by from participants Virginia, Maryland and D.C.

Figures are based on Fairfax County’s 6-percent hotel-occupancy and sales-tax rates, he said.

Figures are not available yet on a location-by-location basis and will be tough to calculate, officials said. Reston likely saw a good portion of spending because the Athletes Village was headquartered at Reston Town Center, drawing athletes and their families to visit Reston and spend money here. There were also several athletic events in Reston.

There were 10,000 participants in the Games and about 2,000 of those athletes were local, organizers said. The Games featured competition at 52 venues, most of which were in Fairfax County. The Games were marred by a sad incident, when a Brazilian police inspector was fatally injured in a bike race.

Biggar said that based on the police games success, Fairfax will now pursue the 2019 National Senior Games. The 2017 Police Games will be held in Montreal.

The Supervisors said they were pleased with Fairfax being shown in a positive light at the event.