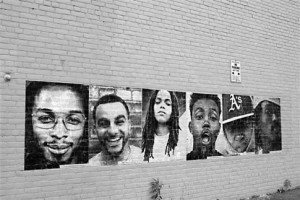 Comstock Partners has teamed with the Initiative for Public Art Reston (IPAR) and Reston Community Center for the upcoming We Make Reston public art project.

The project will feature portraits of Restonians in order to reflect Reston’s diversity. Originally slated for display at Lake Anne Plaza in September, Comstock will also participate by providing a second location for the exhibit.

We Make Reston will now also be featured on Comstock’s 140-foot fencing wall at the Wiehle-Reston Metro Station and on a seven-story banner visible from the Dulles Toll Road, Comstock says.

All displays will open Sept. 26, in conjunction with the Reston Multicultural Festival.

Comstock will have a “street team” of photographers on the Reston Station plaza near the north entrance to the Wiehle-Reston East Metro station Tuesday from 4 to 7 p.m. and Wednesday from noon to 7 p.m.

On Tuesday, photographers will provide more info to Reston commuters and residents and invite them to add the photos to the project, says Comstock spokeswoman Maggie Parker.

On Wednesday, interested participants can return with their signed release and be photographed, said Parker.

We Make Reston is part of the INSIDE OUT project – a global initiative with 200,000 participants from more than 112 countries.

Residents are still encouraged to submit their own portraits for the project. The deadline for submission in Aug. 9. Photos must be black and white and vertical in orientation. For more submission details visit RCC’s website.