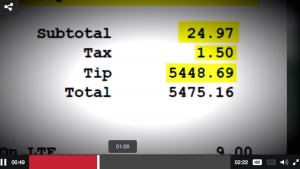 Pallavi Srivastava and her husband visited Life Time in April. After taking a tour of the facility, they stopped by the gym’s café, WJLA says. They ordered two black bean burgers and a chicken curry wrap. The total came out to $24.97 with tax of $1.50 and tip.

Srivastava said Lifetime told her the server accidentally entered his employee ID in the space for the tip amount.

Here’s what happened next, according to WJLA:

Lifetime promised to correct everything, but the next day they called back saying, “Sorry we gave you back too much money.”

Lifetime asked if she would be comfortable giving them back the credit card so they could recharge the entire amount and then refund it again.

By that time she had interest and late fees and the deadline had passed to dispute the bill with their credit card company.

Then came another call from Lifetime Fitness telling her they had already closed the financial books and couldn’t process the refund.

They referred her to Lifetime’s corporate offices. Four months later she and her husband are still fighting to get the charge cleared off their credit card bill.

So she contacted 7 On Your Side.

“When we said ABC7 News is getting involved, that’s when suddenly we get a call back from this lady who says we can do it,” she says.

7 On Your Side contacted Lifetime’s management. They admitted it was human error and have taken full responsibility. They say they’ve been working with the family’s credit card company and are promising the full refund by the end of the week.