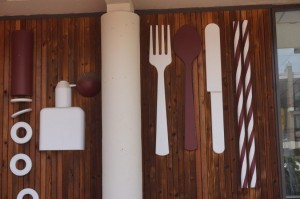 It has been nearly a year since Lakeside Pharmacy at Lake Anne Plaza shut its doors after more than four decades in business.

Former owner Larry Cohn, who was also the pharmacist, retired last year when the building was sold to investors. There have been several prospective tenants, but so far no one has signed to take over the space.

Lakeside Pharmacy — with its campy drugstore art on the outside of the building — was the last original store at Lake Anne Village Center (now Lake Anne Plaza). For generations of Restonians it was the place to go for everything from filling a prescription to mailing a package (it had a U.S. Post Office outlet inside) to enjoying a hamburger and fries at the old-school lunch counter.

The site can be rented all as one unit, or as two separate ones if a tenant wanted to just operate the former lunch counter space. The space overlooks both the plaza and the lake.

The pharmacy space, along with the rest of the businesses on the plaza, have historical designation — as well as residences above them — and cannot be drastically altered. The plans for Lake Anne Revitalization will also not be changing that area of the plaza.

Other changes happening soon at Lake Anne Plaza: New ownership for the Lake Anne Coffee House, which will undergo a major menu and interior upgrade, and Reston’s first microbrewery, which plans to open next month.

What do you think would do well in the space? Tell us in the comments.