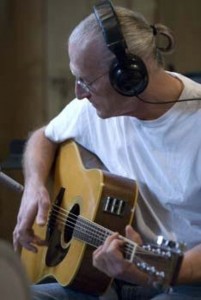 Remember the other day, when you were humming a tune from the 1970s, still rolling around your brain or perhaps fresh from Deep Tracks on SiriusXM?

Larry Burnett, who has worked at The UPS Store at South Lakes Village Center for a decade, is humming some of them too. That’s because he wrote and played guitar a few of them, back when he was a member of the band Firefall, enjoying lots of hard living as a soft rock star.

Forty years ago, Burnett was playing “You Are The Woman,” “Just Remember I Love You,” “Strange Way,” and writing “Cinderella,” all Top 40 hits.

Now he is the man to see for your shipping needs.

“I am grateful it all happened,” Burnett, 63, says. “But I lacked gratitude then. I know there would people lining up around the block who would have been dying for the opportunity.”

Burnett’s still singing and songwriting, playing as a solo, duo and part of a trio at places like the Birchmere in Alexandria and the Tally Ho in Leesburg. He’s had the same guitar for 30 years and says “it would be difficult to live without it in arm’s reach.”

“Whatever’s there is still there,” he says of his love of music.

But a man’s still got to have a day job.

Burnett’s story is sort of a right-place-at-the right time, a pretty good singer and 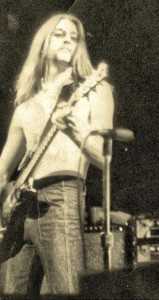 acoustic guitar player in the era of the singer-songwriter (think early 70s and the Eagles, Jackson Browne, America, Poco).

Burnett, who lives in Sterling, says he first picked up a guitar at age 8 and taught himself to play by ear by listening to a local folk music radio station and his mother’s record collection of Chet Atkins, Les Paul and Mary Ford, among others.

“We were a bunch of white guys playing R & B,” he said. “We weren’t that good, but we were popular. We had personality and played pretty good music.”

That was also around the time Burnett discovered drugs, he said.

By the early 1970s, Burnett was working construction, driving a cab and playing gigs around DC. He played Sundays at open mic night at the old Cellar Door in D.C. The sound and lighting guy recorded one of his sets, and then slipped the tapes to headliners like Bonnie Raitt and John Prine. The sound guy also gave one to Rick Roberts, a singer-songwriter who played with The Flying Burrito Brothers.

“One day, Rick called me and said he got me a plane ticket to Colorado, where he lived, the next day [to start forming a band],” says Burnett. “I was due in court the next day on drug charges. I told him if it didn’t go well, I would be tied up for the next 5 to 40 years. If I am not there, start without me.”

The charges didn’t stick. Burnett made it to Colorado. They formed a band and cut a demo for Warner Brothers. Warner Brothers opted not to sign them, but they took the tape to Atlantic Records, which did.

The first album, Firefall was released in May 1976 and was Atlantic’s quickest record to reach Gold status at the time.

There were six more albums and about five years of near-constant touring as headliners and as openers for the Steve Miller Band, the Doobie Brothers, The Band and the Electric Light Orchestra. They were the opening act for Fleetwood Mac during the Rumors era.

“I was a huge fan of all those people,” said Burnett. “I was in heaven.”

Burnett also admits he was really, really high most of the time.

By 1981, the label had dropped them and it was harder to get gigs. After Firefall finished a show in Florida, Burnett got on a plane to enter rehab in D.C.

“I was out in five days,” he says of the first rehab stint. “I had bounced a check to get in, so I knew I would have to leave quickly anyway.”

Next came restaurant jobs around D.C. and “trying to live a normal life.” That lasted about five years. Rock bottom was an overdose that left him unable to use his legs for about 18 months.

But Burnett needed a sit-down job. He was a radio disc jockey around the Washington area for nine years, worked in sales, got married, had a son, got divorced.

Which brings us back to The UPS store, where Burnett stopped by 10 years ago.

“I need to make a living, no matter how modest,” he said. Working at the Reston store puts him in touch with lots of normal people, he says.

In January, Burnett and Firefall were inducted into the Colorado Music Hall of Fame. Last month, Burnett sat in with Firefall — a reworked version still tours — on stage at the Birchmere.

He still gets royalties because Firefall tunes are still a soft rock radio mainstay. But it is still a long way from the Ferrari from the 1970s to the Subaru Forester he drives today.

Easy come, easy go. Being rich and somewhat famous wasn’t the goal in the first place, he says.

“It wasn’t my dream,” says Burnett. “It just sort of fell on me. I didn’t have to work very hard at all. I was given a gift, so I had an obligation. I thought if God is like my mother, I am in trouble. My mom would give you a sweater for Christmas and continually check and see if you were wearing it. If you didn’t wear it by March, she would take it back. So I had an obligation to use music, to cultivate my talent and share it with people.”