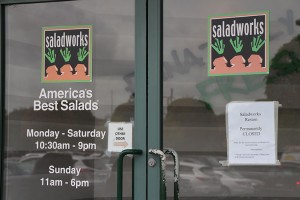 Saladworks in Plaza America has permanently shut its doors.

The restaurant, which boasted it had “America’s best salads,” posted signs on its doors notifying customers of the closure. The signs recommend customers visit other locations in Richmond or College Park, Maryland.

The owner of the Reston branch of Saladworks decided to close the store, said Jena Henderson, a spokeswoman with the company.

Henderson could not say what the specifics reasons were for closing the Reston location.

“We love the Reston market and the people of Reston and are so grateful for their patronage over the years,” Henderson said. “We certainly have this earmarked as a market we would like to have a presence in in the future.”