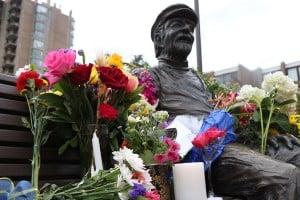 The community is invited to attend a candlelight vigil on Friday to honor the life and legacy of Reston founder Robert E. Simon, who died on Monday at age 1o1.

This will be an informal gathering, with a more organized memorial service to be held at a later date, a spokeswoman said.

The vigil, organized by Around Reston magazine, begins at 6:45 p.m. at Lake Anne Plaza. The first 300 visitors will be given candles, says Around Reston.

“We believe this respectful, grassroots gathering offers the Reston community an opportunity to come together to celebrate Bob Simon’s life,” Around Reston said on its Facebook page.

The gathering will be led by Pastor Tim Ward of Restoration United Methodist Church. It will include several speakers from the Reston community.

In lieu of flowers, Simon’s family has requested that memorial donations be made to Cornerstones. Read a message from Cornerstones CEO Kerrie Wilson on the nonprofit’s website. Said Wilson:

“Every organization has a founder’s story. In Reston the story goes that Robert E. Simon envisioned a place where people were welcomed and welcoming, and the assets that sustain and enrich a person throughout his life were available from the beginning in a new town in which “community” would flourish.

From fulfilling jobs and a wide range of housing types at prices to meet each family’s need over a lifetime, to accessible cultural and recreational experiences to enjoy with good friends or on one’s own, Robert E. Simon envisioned a vibrant, living place that attended to and feeds the soul. While his plans were never fully or perfectly implemented to scale, the blueprints are safe in our hands.”

The Reston Historic Trust is organizing an online archive of tributes to Simon — from news articles to personal remembrances. Access the archive on the museum’s website to contribute.

Community member Will Marlow has also started Celebrating Bob, an archive where people can upload photos and memories of Simon.