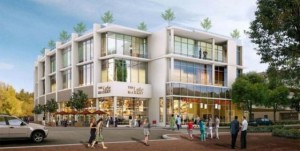 With the developer backing out of the Lake Anne redevelopment deal, the one acre of Reston Association land that was swapped as part of the plan will return to RA’s possession, says an attorney representing the association.

In 2014, RA and the county agreed to a land swap with Fairfax County in order for Lake Anne Development Partners to complete its large mixed-use plans.

RA gave the county one acre of land adjacent to Lake Anne Plaza on which the developers planned to build a 120-space parking garage. In return, RA would get 1.2 acres of land off of Baron Cameron Avenue. At the time, the swap was controversial because the Lake Anne land contained mature trees, among other reasons.

As part of the deal, RA would also get $100,000 for environmental improvements (tree care and stream restoration, for example). LADP also pledged to pay for 25 percent of the cost of dredging Lake Anne, a project that was recently completed.

RA Treasurer Dannielle LaRosa said on Thursday none of that pledged money was included in the association’s 2016 budget.

McBride said at RA’s regular monthly meeting on Thursday that the swap was “expressly contingent upon final agreement between LADP and the County being implemented and continuing through to performance.”

So, no deal means no land swap. When the LADP contract is officially terminated, which it should be soon, then the land swap issue is also terminated, said McBride. The RA  board does not have to take any action.

“RA owns the property and always has,” McBride said.

LADP’s plans would have brought 1,000 residences and over 100,000 square feet of office and retail space to the Lake Anne area. LADP reps said last Friday the  plan was not economically feasible and it was backing out of its contract.