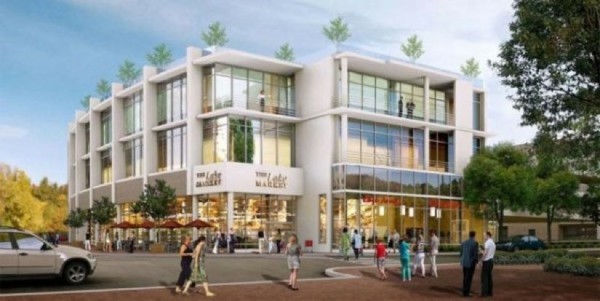 That’s how long plans for revitalization of Lake Anne Village Center were discussed and criticized, reviewed and voted upon, anticipated, and finally revoked.

Lake Anne Development Partners (LADP) announced late last week that it was terminating its agreement with Fairfax County for the giant redevelopment plans for Crescent Apartments and the area near Lake Anne Plaza.

But LADP, chosen by Fairfax County after a request for proposals in 2013, never put a price tag on the grand plan. LADP said on Friday that it “has not been able to satisfactorily assemble all of the required land parcels needed for a viable development plan.” Sources said that did not happen because the company was unable to get the necessary financing to do so.

Here are some questions and answers about the project.

Why was Fairfax County involved in the project?

Fairfax County owns Crescent Apartments, which it purchased for $49.5 million in 2006 to use as affordable housing.

The county said the future of Lake Anne depended on obtaining and maintaining critical mass, which would happen with redevelopment.

It doesn’t mean it was a quick process. In October of 2012, several Lake Anne residents and merchants stormed out of a meeting, frustrated with the county timeline that revitalization would not happen until after 2016.

“I am wondering why you called this meeting,” said one woman. “We have told you 15 times what we want for Lake Anne. This is [expletive].”

What happens to Crescent Apartments now?

VOICE, a local advocacy group for recent immigrants and other low-income residents, held several rallies and spoke at Board of Supervisors’ hearings during the process.

LADP assured residents that Crescent’s 181 affordable units would be replaced, and county guidelines in the RFP required developers to offer an additional 151 units to be workforce housing. That meant about one-third of the nearly 1,000 new apartments would have below-market rates.

So it now it is back to 181 aging units. Crescent had apparently cut back on recent leasing as it prepared for development, which also promised relocation of the residents as it tore down the buildings. Replacing Crescent was slated to be the first phase of the LADP plan.

Hunter Mill Supervisor Cathy Hudgins told residents in a letter last week “that you can continue to live at the Crescent and that we will remain committed to keeping the Crescent a vibrant, attractive place to call home. We will have high standards for the appearance of the property, and will maintain it with great care.”

Hudgins said Crescent “has a significant number of apartments vacant because of the planned redevelopment,” and will start leasing again in the coming weeks and months.

What about the Lake Anne land Reston Association swapped to get the deal done?

In late 2013, Reston Association’s Board of Directors approved a deal to swap an acre of its land adjacent to Lake Anne Plaza for a similar-sized piece off of Baron Cameron Avenue.

LADP planned to use the land to build a 120-space parking garage.

The deal was controversial at the time, though, because the Lake Anne plot contained mature trees and the Baron Cameron land was considered less desirable.

At 2013 meetings, citizens concerned with the environment pleaded with the board to think about the ecosystem and an alternative parking area that does not remove mature trees. Others asked the board to go ahead with the plan to ensure the economic viability of Lake Anne Plaza’s future.

The approved swap entered RA into a non-binding letter of intent with LADP.

Reston Association did not have immediate answers on the future of the land when contacted Friday and Sunday.

What about the new businesses getting ready to open at Lake Anne Plaza? Were they counting on critical mass with the redevelopment?

Not really. Lake Anne Plaza was going to get worse (a torn-up parking lot, a temporarily relocated Saturday farmers market, and lots of construction equipment) before it got better. The entire redevelopment was expected to take 10-12 years.

Melissa Romano, a Lake Anne resident who is getting ready to open Lake Anne Brew House on the plaza, said is “certainly saddened by the news of the halted redevelopment,” but looks forward to opening Reston’s first nanobrewery in early 2016.

“We purchased our property because we believe in the original spirit of Lake Anne Plaza, and we believe that our business will be part of a renaissance for the Plaza,” she said. ” Alongside current, new, and future merchants, Lake Anne will not only continue to be the special gem that it is, but will also see a vibrant new energy come its way.”

How do the established merchants feel?

They are disappointed as well.

“Although this is a significant setback for Lake Anne’s redevelopment efforts, Lake Anne is still committed to invest in the vitality of the Plaza. We continue to have a community of supporters and advocates who take pride in Lake Anne and are investing in our community to keep it active, local, and sustainable.”

“Development of Crescent and Lake Anne Village Center has been a critical priority for the Reston community,” Hudgins said. “I look forward to working with the community to examine further opportunities to bring the redevelopment of these areas to fruition.”

“The County is deeply disappointed by this turn of events and shares the frustration that we know the community must be feeling. We will keep the community informed on the status of the site.”

It is not yet known whether the county would reach back into the 2013 RFP to see if a previous’ application would still be interested or whether it would issue a new RFP.

If a new plan is picked, look for a less ambitious — read, smaller and less expensive — one. Since LADP’s plan fell apart because of “economic viability,” as Hudgins said, it is likely the same would happen with a new developer.