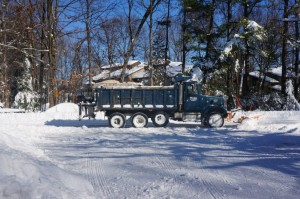 The Virginia Department of Transportation (VDOT) says its goal is to make one lane of all Northern Virginia subdivisions passable by Wednesday at 6 a.m., but the daunting amount of snow is one of many factors that has impeded speedy snow removal.

The agency, which is responsible for most of Virginia’s primary and secondary roads, said in a statement that “crews are making significant progress on 16,000 subdivision streets across Northern Virginia. If residents do not have one passable lane by 6 a.m. tomorrow, they can contact VDOT at 1-800-FOR-ROAD or [email protected]

“VDOT has approximately almost four times the amount of equipment available in previous years,” VDOT said. “The type of equipment needed for this phase of the response is of a much larger scale and complexity. The smaller plows that VDOT typically uses in subdivision are effective up to 10 inches of snow. Some neighborhoods of Northern Virginia received upwards of 40 inches of snow and require heavier equipment.”

The blizzard that dumped about three feet of snow in this area over the weekend was “historic,” VDOT officials said. As with previous large storms, (i.e. in 2003 and 2010), they are urging residents to be patient.

In Reston, many residents of VDOT-plowed neighborhoods have been voicing their frustrations 48 hours after the snow stopped falling.

VDOT officials said clearing the remaining subdivisions involves heavy equipment and is more slow-going, especially from a blizzard this large. They are urging people to stay off the roads, as traffic is still impeding plow progress.

Reston Now reader Adam Petersen, who has worked as a snow plow operator, explained on Reston Now’s Facebook page on what it’s like to be a plow driver after a massive storm:

I have done snow removal for a long time (not this year). This is a record snow. Nobody is equipped to handle a storm of this size. Everyone was also dealing with a huge gas shortage.

When you deal with snow amounts like this trucks and machinery break down. Employees break down from multiple days of exceptionally hard work with little to no sleep. All those employees have to dig their cars out before getting on the road for a treacherous and long ride to work just to dig your cars out. You end up losing some of your work force to exhaustion and just not being able to get back in to work.

It also takes far longer to get from one job to the next due to impassable roads and regularly getting stuck and having to dig yourself out.

So now you have more snow than ever before with less equipment than usual, a smaller work force, a gas shortage and the fact that it also takes them forever to get from job to job due to horrible road conditions.

VDOT said the excessive demand on the customer service center phone line (800-367-ROAD) and www.vdotplows.org site has caused server problems, which are being addressed.

“We have more work to do, and are working as hard and fast as we can,” says VDOT.

Crews are using equipment from VDOT and private contractors from as far as Connecticut. The agency says it invites contractors with loaders, Bobcats, motor graders and operators to contact VDOT Northern Virginia’s procurement office at 703-259-3240.