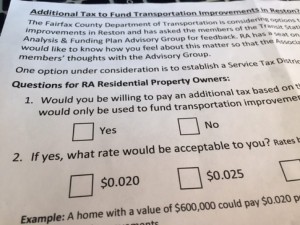 Reston Association is seeking member opinion on the implementation of a special service tax district to help pay for transportation improvements.

Fairfax County is currently in the process of examining what the Reston area needs as it moves forward as a transit-oriented community. At a meeting in February, county officials said Reston is going to need more than $2.6 billion in transportation improvements to keep up with development and population growth in the next 40 years.

High on the priority list are an urban-style street grid around transit stations and additional spots to cross the Dulles Toll Road, according to the advisory group.

A special tax district can be put in place by the Board of Supervisors and does not require landowner approval. Reston Association is polling members purely for feedback; it does not have authority to institute a tax or special assessment for transportation.

In Reston, homeowners already are members of the county’s Small Tax District 5, which funds the Reston Community Center. That’s in addition to Reston Association assessments, Fairfax County and Virginia taxes for all RA members, as well as cluster dues or condo fees for many.

RA is hoping to get member thoughts so Fulkerson can report back to the advisory group in late April.

“I would like to go back and give them a sense of reaction,” said Fulkerson.

Would you be willing to pay an additional tax based on the value of your property that would only be used to fund transportation improvements in Reston? (Yes; No)

Fulkerson said the question will also be sent electronically to RA members.

See the advisory group’s breakdown of what Reston needs in the December 2015 presentation attached to this previous Reston Now article.