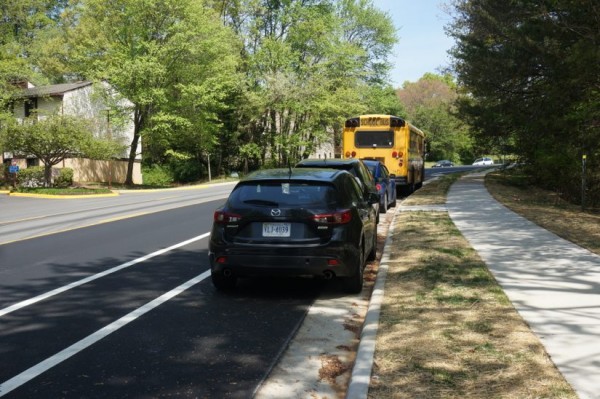 Virginia Department of Transportation crews are nearly done with a $1.5 million project to add sidewalks to the east side of Soapstone Drive from Glade to South Lakes Drive.

The work caps several improvements over the last few years to the increasingly traveled road. Among the additions: Going from two lanes in each direction to a wider road with one lane each way with bike lanes and turning lanes.

Another recent addition: “No parking” signs, which were installed along the new sidewalk stretch in the last few weeks. Several residents have reported getting ticketed when they left their cars on the east side of the road.

There has traditionally been parking on both sides of Soapstone, including on the gravel shoulder of the west side. The new east side was configured with a parking lane, and then a grass strip to provide a buffer so pedestrians aren’t hit with car doors while walking on the sidewalk.

John Farrell, president of Colonial Oaks Cluster, which is located off the stretch of Soapstone in question, said the signs were installed wrong and he is working with county transportation officials to correct the issue.

He said there is supposed to be some no parking areas, particularly to provide access to the Soapstone convenience center and into clusters on that stretch.

“We are determined that parking be restored on the east side,” he said. “They are not supposed to be parking within the sight lines of the shopping center and clusters, but otherwise it should be allowed on Soapstone. We don’t want people parking in our cluster [instead].”

Meanwhile, beware of the no-parking zones.