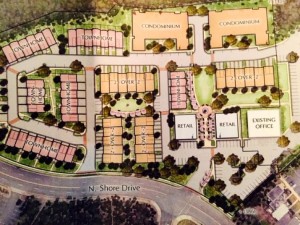 The future of Tall Oaks Village Center is back open for discussion.

Hunter Mill Supervisor Cathy Hudgins and The Jefferson Apartment Group (JAG) are holding a community meeting May 10 to share a revised proposal for the ailing Village Center, which has been mostly vacant for several years.

The future of the village center has been been a development topic for more than a year and the new proposal is scheduled to go before the Fairfax County Planning Commission on June 23.

JAG purchased Tall Oaks in December of 2014. The group held a series of community meetings in the spring of 2015, where it outlined plans to turn the 70,0000-square-foot center into more than 100 multifamily units and townhomes and limited (about 3,000 square feet) of retail.

That did not sit well with neighborhood residents, who said the center could work as retail if marketed properly. Reston Association also said in a letter to county officials last summer that the plan fell “woefully short” on retail and community space.

JAG then came back with a new proposal, which offered a reduction in the number of residences and doubled the planned retail space to 7,000 square feet.

JAG representatives said in February they would also conduct a market study examining the area’s retail viability. The results of that study are expected to be available at the May 10 meeting.

Several Tall Oaks-area residents have said they would like to see a study done independent of the one JAG is conducting.

They have also said they would like to see about 10,000 square feet of retail, as well as more green space, on the site.