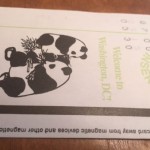 Do you still have paper Metro fare cards with value? Gather them up to trade them in today or lose the money.

Starting Friday, July 1, paper fare cards will be worthless, Metro says. While Metro has since March only been accepting the reusable SmarTrip cards for station entry, it was still issuing refunds and transferring balances to the SmarTrip cards.

Metro had hoped to go to a smartphone-entry system this summer, but the transit agency announced last spring it was canceling the $150 million contract to replace its fare gate system while Metro concentrated on making needed safety repairs.

Riders must pay $2 to buy a SmarTrip, but it is reusable and reloadable. Metro officials say the average SmarTrip card lasts more than four years.

As for the farecard machines, the older brown fare machines will only be used to add value, while the newer, blue machines will be able to both dispense new cards and add value.

Jim Bongiorno, who is running the paper farecard elimination project, told WTOP this is the culmination of a process that began in 2009.

“Come July 1, 2016, if you still have a paper farecard, congratulations, you have a Metro souvenir,” he says.

To get a cash refund on your paper fare card, you must live 100 miles or more from the Washington area.

More Stories
Morning NotesSunday: Tea with a ‘Suffragette’ in Vienna