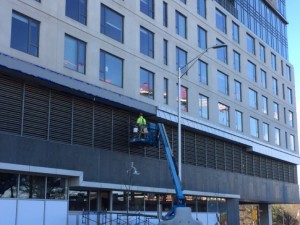 Reston Station is getting a coffee house — one that will look familiar to, well, everyone.

Starbucks has signed a lease to take over newly built-out space on the plaza level of the BLVD apartments, says a Comstock spokeswoman. An exact opening date has not been announced.

Comstock is the developer behind BLVD, which began leasing earlier this year, as well as the rest of the mixed-use development adjacent to the Wiehle-Reston East Metro station.

Want to drink local? The revamped Lake Anne Coffee House is expected to re-open under new ownership in the next few months.