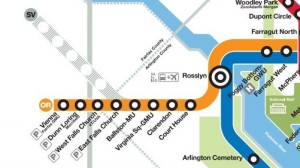 Weidefeld on Wednesday released the final production report for the second SafeTrack surge. He said that all planned work had been completed during the 16-day project.

“I am satisfied that we are accomplishing our objectives with respect to the pace of track work progress in Surge No. 2,” Wiedefeld said in a statement. “Our continued success depends upon Metro customers heeding the warnings about reduced service during SafeTrack surges and finding alternate ways to commute. I am optimistic as we get underway now with Surge No. 3.”

Metro is rotating closings of sections of the system in order to complete three year’s of maintenance in about 10 months. There will be 15 safety surges overall.

Surge No. 3 began on Tuesday, July 5 and includes a complete rail shutdown between National Airport and Braddock Road, impacting Yellow and Blue Line riders. All Metro customers traveling to/from DC must use shuttle buses between Braddock Rd and Pentagon City during the project. Southbound customers should exit at Pentagon City for a bus shuttle.