Reston Association CEO Cate Fulkerson has found additional variances in the association’s budget to cover more than $430,000 of cost overruns that occurred in renovating the Lake House, according to RA documents.

After renovation costs were found to be nearly triple what the association had forecast, RA moved $430,000 from its operating fund to cover the deficit.

In June, Fulkerson said she found variances to cover about $355,000 of the money — including foregoing $15,000 of her own salary raise and potential bonus. The RA Board directed Fulkerson to come back to the July 28 meeting with more ways to save money. 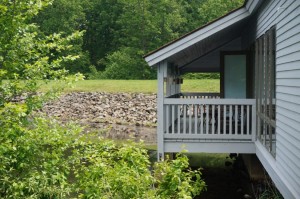 New projections are that RA will save an additional $76,000 in seasonal hires, with about $30,000 of that savings happening from July to December of 2016.

Other cost savings are coming from not refilling an accounts receivable position ($114,000); forgoing hiring a land use assistant ($66,000); other hiring restructuring (about $100,000), among other changes.

See full savings projections on the graphic attached to this post.

RA purchased the Lake House, then known as the Tetra building, for $2.65 million in July 2015. The 33-year-old building on the shores of Lake Newport, which served as the Reston Visitors Center for about 20 years, added to RA’s contiguous open space and fended off the chance of commercial development.

But as renovations got underway, costs soon began mounting. RA’s Board of Directors voted in late May to move $430,000 from its operating fund to cover the Lake House overrun.

The deficit was caused by several factors, including the previous tenant opting not to rent back through 2016 and renovation costs that were far more expensive than forecast, RA has said.

A panel of community volunteers is in the process of being selected and will help hire an auditing firm to conduct an investigation into what went wrong on the project. That investigation is expected to be completed in early fall.

Meanwhile, RA reports that it is starting to collect money from Lake House use. The building officially opened about a month ago. More than 90 children are taking part in camp and after-camp programs. There are also 14 reservations (as of June 30) for corporate and wedding rentals.

Fulkerson will also present a new system of capital project review — one that involves many more check-ins on costs and progress — to the board at Thursday’s meeting.