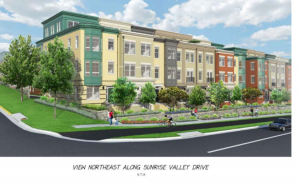 August was a slow month in an otherwise very busy year for new development in Reston.

The Fairfax County Planning Commission does not meet in August, but they will be back in September with a host of applications to be reviewed.

Here is a look at what’s on the agenda:

Sept. 14 – Decision only on replacing an office building with 54 townhomes at 11720 Sunrise Valley Dr. This is just feet away from the former American Press Institute, which was approved for residential redevelopment by the Fairfax County Board of Supervisors earlier this summer.

The planning commission held a public hearing on the application in July, but deferred decision until September. Read more about it on this previous Reston Now post.

The controversial API building and the office building parcel across Roland Clarke Place are both owned by Rooney Properties.

Sept. 14 – Public hearing on General Dynamics’ plans to build a 190,000-square-foot office building on a wooded parcel off of Sunset Hills Road. The building, which would house about 200 employees, is within zoning guidelines, but residents have traffic concerns.

Sept. 21 – Wiehle Station Ventures will have a public hearing on its rezoning application to build 260 condominiums at Sunrise Valley Drive and Commerce Park Drive, close to the south entrance of the Wiehle-Reston East Metro station.

Sept. 28 – Milestone Communications and Verizon will have a public hearing to discuss plans to build a cell phone tower disguised as a tree on Crossfield Elementary School grounds. The plan has not been well-received by Crossfield families.

Sept. 29 – After many postponements, Pulte Home Corporation is finally scheduled for its rezoning hearing in an effort to turn a one-story office building at 1825 Michael Faraday Ct. into 42 “two-over-two” townhomes in a development called The Lofts at Reston Station.

Hearings/meetings are at 8:15 p.m. at the Fairfax County Government Center. The agenda items are subject to change.