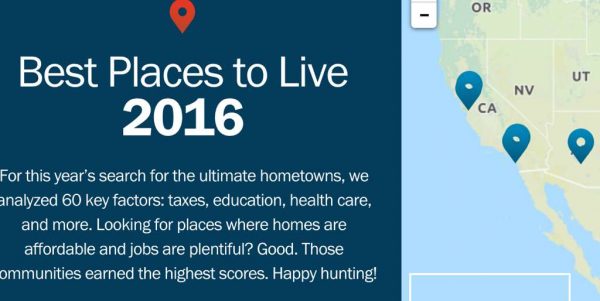 With its pools and paths and other amenities, you may think Reston is a great place to live. Money magazine, not so much.

But that’s not that new – Reston was off the list last year as well. It was, however, lumped in with “Hunter Mill District” (say what?) at No. 28 this year.

If you plus Reston’s stats into Money’s “How Does Your Town Stack Up” calculator, Reston fares well: 65 percent of residents have at least a Bachelor’s Degree (the national average is 28 percent); the average commute time is 25 minutes (exactly average); median family income is $126,000, double the national average; and unemployment is an anemic 3.2 percent.

On the downside, the average home price is $415,000 and property taxes are about $5,000 annually (twice the national average). Job Growth is expected to only be about 2 percent in the next year.

“This is not to say Reston is not a great place to live, it is,” says Money’s Editor-at-Large Marc Peyser. “It has made our list several times. But we are obviously very sensitive to financial factors, the median home price in Reston is not cheap.”

However, here’s Money’s top pick for 2016: Columbia, Md. That’s a place in Howard County planned in the same way as Reston — it even has former Reston Association CEO Milton Matthews serving as Columbia Association President.

Here is what Money has to say about the fair neighbors to the north:

Why We Love It: Columbia is a planned community that prizes economic and social diversity.

Columbia, Md. turns 50 years old next year, received the top spot on the list because of its job growth and highly-rated school system. The town is specifically designed to accommodate and promote diversity–one of the characteristics its residents are most proud of.

Columbia, Md., turns 50 next year, and it’s never looked better. One of the most successful planned communities in the country, Columbia is a magnet in the Baltimore-Washington corridor, attracting families in search of good schools and businesses hungry for educated employees.

A planned community — where covenants limit everything from new construction to the color you can paint your home — isn’t for everyone.

But Columbia is clearly thriving. It ranks in the top 5 percent of the 823 places on this year’s list for job growth and economic opportunity. The schools are among the state’s best. And in this pricey corner of the country, Columbia’s median home price is just over $300,000, 11 percent less than in Gaithersburg, one county over.

The prices may be right, but Columbia also owes its success to an idea–or maybe it’s an ideal. Founded in the late ’60s, the town made the concept of community building part of the master plan. Each of the 10 bucolically named villages (Wilde Lake, Oakland Mills) includes a mix of residences– apartments, townhomes, and single-family houses–to promote socioeconomic diversity.