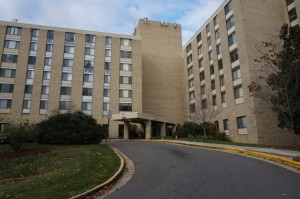 The Fellowship Square Foundation (FSF), which operates the Lake Anne buildings, the facility at Hunters Woods Village Center, and several others in the Washington, DC area, says it has a signed deal with the Community Preservation and Development Corporation (CPDC) for a new building to replace the aging structures at 11480-11450 North Shore Drive in Reston.

The new construction project will replace all 240 apartment units, built in the early 1970s,with “a new, state of the art facility,” according to a release.

CPDC is a non-profit developer of affordable housing.

“We look forward to pursuing this project with CPDC to make this vision a reality for the Lake Anne community,” said Renee Jakobs, president of Fellowship Square Foundation.

Similar plans for Lake Anne Fellowship House have been made — and fallen apart — in the last few years.

In 2013, the foundation had an agreement with Cafritz Interests and Novus Development for new housing on the site. John Thillman, a developer and former Fairfax County Planning Commissioner who was at the time on the Fellowship Square Board of Directors, said then that 114 of the units are subsidized. The rest are market rate, but the buildings have a 20-percent vacancy rate and lose about $10,000 month, he said.

A study also showed that it would cost less to build a whole new building than it would to renovate the aging structure, which has narrow hallways and faulty air conditioning system, among other issues.

“We’re bleeding red ink,” he told the Reston Planning and Zoning Committee in November of 2013. “The main reason the rent is low is the buildings were built in 1971 and ’74.  The standards used are not the same as today.”

But Thillman knew that the building faced long odds for redevelopment. The six-acre property had two different mortgage holders: The Department of Housing and Urban Development for the west side and the Virginia Housing Development Authority for the eastern half.

By September 2014, the foundation deferred its application indefinitely “due to our inability to advance our land use proposal in a manner that will produce the best possible outcome for our residents.”

FSF officials said then a portion of the mortgage was slated to be paid off in September of 2016, which means the timing and situation may be better now.

FSF plans to build a new building on available land on the site. Once the new building is completed, existing residents will move, FSF says on its website.

In the coming months, FSF and CPDC will work to obtain the required zoning and building permits, finalize architectural plans and obtain financing for the project.