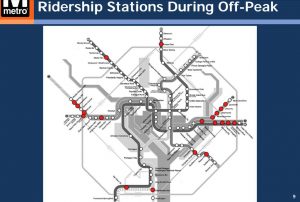 Metro recently floated the idea of possibly closing rail stations during off-peak hours as part of a wider cost-cutting measure. The proposal to shut 20 under-used stations midday and late night is part of a solution to a projected $275 million budget shortfall.

The proposal, released two weeks ago in advance of Metro’s budget talks, mentioned several Silver Line locations, including Spring Hill, Greensboro, McLean, and Virginia Square-GMU, as well as several on the Prince George’s side of the line (Addison Road, Benning Road, Stadium-Armory, and Capital Heights)

The agency received criticism that the Maryland stations, which are located in lower-income neighborhoods, would affect people who needed public transportation most.

Now Metro says it was not serious, reports The Washington Post.

Metro heard from many community members during a nearly 10-hour long meeting on Thursday. Residents were livid, reports the Post:

Following the backlash, Metro said the map was meant only to illustrate the transit agency’s dire financial situation. But critics questioned the wisdom of circulating the idea if there was no formal proposal. Some said it was merely an attempt to threaten the District, Maryland and Virginia to contribute more money to close the budget gap. …

Metro board Chairman Jack Evans applauded riders for taking a stand but said he had no problem with [Metro GM Paul] Wiedefeld’s decision to use the map as a way to illustrate the budget realities facing the troubled system.

“What Paul is trying to do is say, ‘Okay, if the jurisdictions don’t put the money [to cover the budget shortfall] in, then we have to do service cuts,’ ” Evans said. “And what do service cuts mean? . . . It means no bus routes, it means no stopping trains at the lowest-attended stations. That’s service cuts. Service cuts are painful. They’re not abstract.”

Board member Leif Dormsjo said the station closure idea is “not something we are taking through a public process right now.”

“I found the map surprising at the time that it was introduced, and I think it contributes to people’s suspicion that Metro doesn’t have people’s best interests in mind,” he said. “I think that was probably a good indication of how serious the reaction would be to such a concept, if it was something that management was recommending.”

Wiedefeld is expected to release his budget proposal in November.