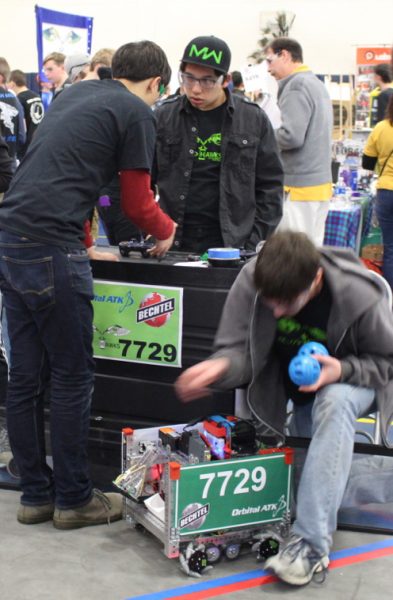 For the second consecutive year, the South Lakes High School Robotics Team has advanced to the FIRST (For Inspiration and Recognition of Science and Technology) Tech Challenge Virginia State Championship. The team, called the <C://>Hawks, participated in the North Central Virginia Qualifying Tournament that took place at Orange County High School on Jan. 14.

Months of preparation put the team on solid ground to contend for the top awards. Their robot, Duchess, performed well on the field, managing the challenges without breakdowns. In their engineering notebook, members of the team’s art department recorded all the activities, including not only software and robot construction progress, but all the outreach activities of which the team has been part.

The <C://>Hawks promoted and expanded their team within the SLHS community and brought their robots and expertise to various community activities such as local Lego League teams and the NOVA Maker Faire. For these efforts, the team was honored with the competition’s Connect Award.

The Inspire Award is given to the team that demonstrates respect and gracious professionalism, is an ambassador for FIRST programs, and demonstrates and documents their work in their community. The <C://>Hawks took second place for this award.

The team will next participate in the FIRST Tech Challenge Virginia State Championship, scheduled for Saturday, Feb. 25 in Lynchburg.