Tennis court upgrades, a proposed agenda item for the February meeting of the Reston Association Board of Directors, could cost nearly $800,000.

Garrett Skinner, RA’s director of capital projects, will bring the item before the RA’s Board Operations Committee at their meeting tonight. The BOC reviews and sets agenda items for the Board of Directors.

According to information provided in the agenda packet for tonight’s BOC meeting:

“During its December 15, 2016 meeting, Vice President [Michael] Sanio noted that tennis amenities are in need of improvement and requested that the board consider developing cost estimates for improvements including lighting, bathroom access and drinking fountains. The attached lighting and bathroom access cost estimates are based historical data and submitted costs from contractors. Costs for water fountains are rough estimates based on extrapolated estimates from Fairfax Water and unit cost estimation for construction. More concrete estimates will need to be developed based on design criteria needed for each location.”

The Shadowood facility (2201 Springwood Drive) is listed as Priority 1 for each category.

The cost estimates show improved lighting could cost a total of $624,000. The upgrades to water fountains and bathrooms could cost $108,000 and about $50,000, respectively. 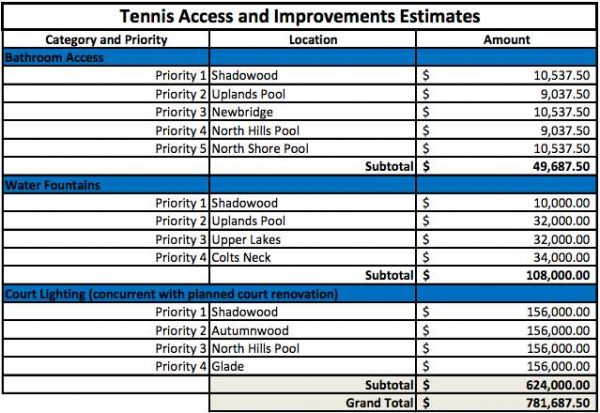 Skinner will also give an update to the BOC on the status of the Central Services facility renovation. Scheduled to cost about $1.6 million, the project was put on hold last year pending review of the Tetra/Lake House purchase.

Pending BOC approval, the items will be placed on the agenda of the Feb. 23 meeting of the Board of Directors.