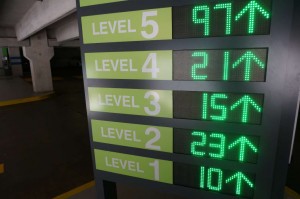 More than 150 people say they will attend a protest of Reston Town Center’s paid parking, and that number is growing.

The scores of potential demonstrators have signaled their intention on a Facebook page titled Park Free RTC (Protest). The group’s organizers are planning the event for Saturday, March 4.

As of noon Monday, 155 people had indicated they would be attending. That number has nearly doubled since Friday. Nearly 400 more had marked that they are “interested” in the event.

Guarang Shah, a Town Center resident, is one of the organizers. He said he expects about 300 people to participate in the “peaceful protest.”

According to the event details listed on the page, which went live last week:

“It’s been almost a month since RTC and Boston Properties has started Paid Parking and nobody is happy about that. Also it is most expensive parking in Northern Virginia compare to any other malls and shopping centers. Now, Reston Town Center looks empty all restaurants, bars and local businesses are down. Reston town center parking been free for years and it should be forever.” [sic]

Dozens of comments from followers of the page detail their frustrations with and anger about the paid parking system, which went into effect Jan. 3.

Reston Town Center merchants have announced they are considering a lawsuit against property owner Boston Properties because of the paid parking, which they say has caused them a large chunk of their sales. Shah said merchants he’s spoken with have shared those concerns.

Shah said he organizes regular social meetups in the Town Center. He said turnout for an annual January charity event he hosts at Vapiano was down by half from last year — and many who came left early.

“Every weekend we have something, and we [would] bring a lot of crowds around the Town Center,” he said. “Right now, nobody wants to go to Town Center. I have events in Herndon and Tysons and Ashburn — we try to stay away from the Town Center.”

Shah said his group of concerned citizens has been holding meetings and plans to fight until paid parking is rescinded.

“We just want to get rid of this [paid] parking,” he said. “It’s been free for 25 years, and this is causing a lot of trouble.”

More Stories
Tennis Court Upgrades Could Cost Nearly $800,000Get Your Valentine’s Day Reservations In Order Before It’s Too Late